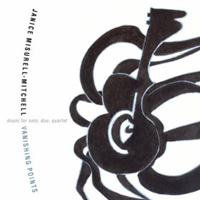 While nowadays it’s pretty much common practice for music to be poly-stylistic, it’s still somewhat rare for music to completely internalize multiple musical languages from various genres and spew them back out into something that is ultimately untranslatable into anything else besides itself. But the music of Chicago-based Janice Misurell-Mitchell seems to do just that, seamlessly weaving elements from high modernism with jazz, Latin, blues, and even funk into an amalgam that is completely its own thing. Vanishing Points, the second retrospective disc of her music from the Southport Composers Series, collects six of her chamber music compositions spanning four decades.

The disc’s opening track, Agitación, is an ideal introduction to her extremely catholic approach to style and form. A roughly 16-minute work from 2005 scored for two pianists and two percussionists, it begins with almost a Latin tinge, albeit supporting a cascade of angular figurations. While the Latin feel grows less and less pronounced with each passing measure, it retains that music’s feeling of regular pulsation, but then that too drops off. Then, at about 3 minutes in, it starts to manifest a bonafide cool jazz aura, with a timbral combination of piano, vibes and drumset that sounds almost suggestive of MJQ, albeit if a young Cecil Taylor had subbed for John Lewis. The music grows somewhat dreamier with more subdued piano lines, as if John Lewis reclaimed the piano chair, but that too soon falls by the wayside. At about 6 minutes in, the Latin feel returns, now seeming fully in Afro-Cuban clave, though the harmonies continue far afield from anything you’d hear on most salsa albums.  But then the ensemble breaks down, allowing individual instruments to have brief, less rhythmically centered solos. Toward the end, a clear jazz groove briefly reappears, but so do other musical elements. At times various percussion thwacks—on instruments that fall outside of 12-tone equal temperament—even wink at Harry Partch. All in all Agitación is a remarkably fluid processing of multiple stylistic streams into something that is completely organic and unified—a defining piece of early 21st century music!

The other works are also intriguing for their polyglot sensibilities. The earliest work on this album, Vanishing Points/Quantum Leaps from 1977 (though revised in 2011), is a hefty and heavy, three-movement piece scored for clarinet and piano trio—the same forces that Olivier Messiaen used in his Quartet for the End of Time. But whereas that famous work exploits the combinatorial possibilities of various subgroups within the quartet for contrast and great emotional intensity, Misurell-Mitchell mostly keeps the full ensemble in play but revels in how the same material (intervals, rhythmic figures) appears to sound different depending on which instruments are foregrounded. According to Seth Boustead’s detailed program notes for the recording, the work—as is suggested by its title—is “concerned with perspective and … how the listeners perceive the development of musical material.”

The very first gestures of Dark was the Night, a 1994 work for solo guitar, have an almost a Flamenco tinge, but from there the piece quickly morphs into something couched in a more modernist contemporary music language—replete with cascades of harmonics and angular leaps. But that too is only part of the picture. Later on it feels more like improvisatory folk guitar and by the end it becomes a full on Mississippi Delta blues, slides and all. According to the notes, the inspiration for the piece was “Dark Was the Night, Cold Was the Ground,” a classic gospel-blues by Texas songster Blind Willie Johnson (whose 1927 recording of it was sent into outer space on the Voyager Golden Record!). However Misurell-Mitchell uses Johnson’s tune only sparingly and except for the clear homage at the very end, it is almost completely unrecognizable.

On Thin Ice was originally composed in 1988 for flute and guitar but is presented here in a 1998 arrangement for flute and marimba. It is a relentless, highly contrapuntal interplay spiced with bravura flutter-tonguings. In addition to her compositional activities, Misurell-Mitchell has been active for decades in the Chicago new music scene as a flutist and vocalist, although flutist Caroline Pittman is the featured soloist for the performance on this recording. The disc, however, does include a sample of Misurell-Mitchell’s own remarkable playing—her 2009 solo composition, border crossings at sunset, in which she recites an original poem, plays flute, and sings (sometimes into the flute).

The remaining work on the disc, Deconstruction Blues, is also an arrangement. A 1991 work originally scored for English horn and keyboard synthesizer (in fact, it was commissioned for that combination specifically to counter stereotypes of 18th century double-reed chamber music), this new version from 2012 returns the music to a much more idiomatic context. By scoring it for the much grittier combo of bass clarinet and Hammond B3 organ, Misurell-Mitchell’s off-kilter flights of fancy here sound like a surreal cross between a chamber piece by Ralph Shapey and a Jimmy Smith album from an alternate universe.

This disc of Misurell-Mitchell’s music is dedicated to the memory of her son Gabriel Mitchell (1973-2012), an extremely talented film-maker, visual artist and songwriter who suffered from schizophrenia. There is an online archive of his work which is also very much worth exploring.