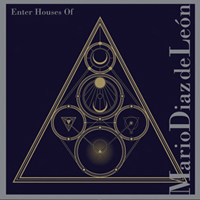 Even though Mario Diaz de León’s release Enter Houses Of (Tzadik) did time on several “Best of” lists as we cruised into the end of 2009, it’s well worth taking another opportunity to chat up this outstanding album. Besides, if this whole “long tail meets niche market” economic model is how we are going to life support the recording industry, a little blast at the recent past probably isn’t time misapplied.

Critically speaking, I realize I will only be adding my voice to a chorus in support of the music Diaz de León is showcasing here. But this disc has especially stood out for me in the way it fires my imagination and how frequently I replay it. Sure, the compositions are fascinating, painting in big aural strokes and melding major electronic ideas and acoustic performances with an assured hand. And the musicians—all ICE players—turn in the kind of technically and artistically daring performances on which the ensemble built its reputation. But there is something elusive in the “man and machine” conversation inside this music that digs its claws deep into the ear and invites repeat visits.

Not that the courtship is exactly wine and roses. Case in point: the first few seconds of distortion opening Mansion feel like they could explode in any genre direction, but what enters next is not the crash of a drum or a powerhouse electric guitar line, but a delicate, introspective flute duet courtesy of Claire Chase and Eric Lamb: sweetness and aggression playing a chess game with equal power and skill.

Speaking of distortion, much of the work on this album captures a kind of Lynch-ian sense of all not being quite right in wonderland. You might have to fight the urge to look over your shoulder (or cover your eyes—or maybe your ears?) through Wendy Richman’s performance of the disorienting II.23 for viola and electronics, and the sound bed created in 2.20, which explodes some similar sonic ideas out to match the forces of a string trio, doesn’t make things any more comfortable. The mystery surrounding The Flesh Needs Fire trades in some of the panic for intrigue and Gated Eclipse for sextet and electronics actually floats itself all the way into a kind of muted awe, but from start to finish, Diaz de León doesn’t let the listener rest easy in any of the music he presents here. Still, the shadowy dreams on offer light an enticingly precarious path.