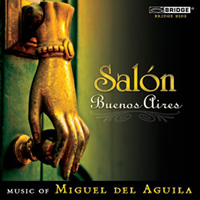 In new music circles, even though we’re now a decade into a new millennium, sometimes the ghosts of modernist erudition continue to haunt our perceptions. For some denizens of contemporaneity, any music which is immediately appealing on first listen—especially music displaying an abundance of overt tunefulness and toe-tapping rhythms—is considered anachronistic, in poor taste, or otherwise aesthetically suspect. And even those of us who claim to be open to all sounds—after all, in a post-Cage sonic universe where all sound is permissible, consonance should be as welcome as dissonance—might be lulled into assuming that such accessible surface details, even though we tolerate them, are somehow antithetical to innovation and compositional rigor.

For such listeners, as well as for those for whom the dialectics of new music continue to be off-putting, some time should be spent with the music of Miguel Del Aguila, whose infectiously groove-laden and tuneworm saturated pieces mask their highly original maverick quirkiness. I’ve been intrigued by Del Aguila’s music since I first heard Conga Line in Hell for chamber orchestra decades ago, so I find it somewhat surprising that the Camerata San Antonio’s new disc featuring five of Del Aguila’s mostly 21st-century chamber compositions on Bridge is actually the first disc devoted exclusively to his music. But perhaps this is par for the course for new music that frequently doesn’t sound new in the way that some gatekeepers think it ought to.

I have to admit that even I was a bit taken aback at first by the kitschiness of the musicians humming along in the “Samba” movement, which opens Salón Buenos Aires, a work for Pierrot quintet plus viola which also lends its title to the disc. Weird, it’s as if Del Aguila knew he was losing me—he opens the next movement, “Tango to Dream,” with inside the piano shenanigans followed by some intriguingly unstable harmonic movement before eventually showcasing another drop-dead gorgeous melody. And if the work’s concluding “Obsessed Milonga” sounds a little too indebted to Piazzolla for you, bear in mind that the milonga was a forerunner to the tango and is just as much a part of Uruguayan as Argentine heritage. And it’s thoroughly ingrained in Del Aguila’s consciousness.

Although he lived in Vienna for nearly a decade and has been based in South California since 1992, the Montevideo-born composer has never lost his South American roots, although these roots seem to span the entire continent. The Andes are the inspiration for the disc’s opener, Charango Capriccioso, scored for the rather unusual combination of string quartet and piano four-hands. The strings evoke the sound of the charango, a double-coursed plucked string instrument which features a resonator that is traditionally made from the shell of an armadillo. Venturing still further north, Caribbean rhythms are at the heart of the brief, somewhat jazzy Presto II for string quartet. And the music of Latin America’s principal colonizer informs the sound world of Life is a Dream, a single-movement composition for string quartet and narrator. The jota, which over the centuries has inspired many other composers beyond the borders of Spain including Liszt and Glinka, is here morphed into an eleven-beat cycle that cascades through a series of modulations into harmonic terrain far removed from its Aragonese origins. The narrator, while not present throughout, is at one point joined in recitation by the members of the quartet, once again defying listener expectation. The text of the narration is an English translation from Pedro Calderon de la Barca’s La vida es sueño, the same play that inspired Lewis Spratlan’s opera whose second act was awarded the Pulitzer Prize in Music ten years ago.

But far and away, the piece de resistance, or rather the piece that should break down your resistance to Del Aguila if you’re still skeptical, is the concluding Clocks, scored for conventional piano quintet, albeit not always played conventionally. Other contemporary composers as far afield as the British Harrison Birtwistle and Uzbekistani-Australian Elena Kats-Chernin have also created major works inspired by clocks; Del Aguila’s horological excursions are a worthy successor to them. Here harmonics, violent pizzicatos, piano figurations both inside and out, and yet another sing-along, very effectively conjure timepieces, including a 4000 year old sun dial and a Rococo-era Swiss clock. In the final movement, multiple layers of time overlap creating one of the most striking examples of metric transformation I have ever heard.