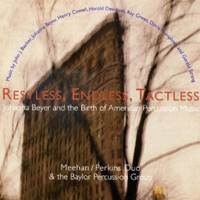 Performers:
The Meehan/Perkins Duo and the Baylor Percussion Group

With Restless, Endless, Tactless, New World Records has once again unearthed a treasure trove of previously unrecorded major American repertoire, this time a remarkable collection of percussion music created by seven different people in the 1930s, much of which was originally published in the now long out-of-print New Music Orchestra Series No. 18, edited by Henry Cowell.

When thinking of percussion music from that era, two names immediately spring to mind: Edgard Varèse for his landmark all-percussion Ionisation composed in 1931 and premiered in 1933, and John Cage, who probably more than any composer established the percussion ensemble as a viable and quintessentially contemporary chamber music medium through a series of iconic works beginning with the 1936 Quartet (which foreshadowed Cage’s absorption with indeterminacy), followed by the still radical Imaginary Landscape 1 and the now almost standard repertoire First Construction (in Metal). But as the New World disc reveals, there was a whole range of music being created for percussion ensemble in the years in between Ionisation and Cage’s first effort.

It should be pointed out that another now mostly forgotten major percussion composer of this era, William Russell (1905-1992), has been purposely excluded from the present collection since his complete oeuvre has been previously collected on an extraordinary disc released in 1994 on Mode records, in performances led by John Kennedy who, coincidentally, has provided the extremely detailed booklet notes for Restless, Endless, Tactless. Similarly, the contemporaneous output of Varèse and Cage—which has been frequently recorded—does not need to be reprised here and therefore is not. (New World has nevertheless made up for anyone who might feel inadvertently slighted by Cage’s omission by featuring numerous heretofore unrecorded Cage works as part of its massive 10-CD collection Music for Merce, an Everest of listening that I still have only gotten through about half of.) All of the music that is included on this disc, however, equally deserves a present-day hearing, and the works of the most widely represented composer here, the once forgotten but now slowly re-emerging Johanna Magdalena Beyer (188-1944), are worthy of standing alongside Ionisation and the percussion music of Cage as cornerstones of the repertoire.

Yet before going into greater details about what makes Beyer’s material so vital, the other music herein is also worthy of comment. Gerald Strang (1908-1983), a student of Arnold Schoenberg who is principally remembered for editing his teacher’s seminal Fundamentals of Music Composition, has been badly represented on recordings. Although his cello concerto was once released as the B-side of a CRI LP featuring the world premiere recording of John Corigliano’s Violin Sonata, the present Percussion Music is, as far as I know, his only composition currently available on CD. Written in 1936 while Strang was still in graduate school (at UC Berkeley), it seems light years away from his subsequent music; in fact, its unapologetic proto-primitivism hints at the corporeality of Harry Partch, though Partch had most certainly never heard a note of Strang’s music.

Harold G. Davidson (1893-1959)—who, as far as I can sleuth out, is making his recording debut here—might very well be the most forgotten composer of the whole lot. In fact, even Cowell who published Davidson’s Auto Accident (1935) recorded here, only knew of this Ohio composer through correspondence. Cowell invited him to submit this piece to his New Music Edition after Davidson had sent him a score for pitched percussion called HELL’S BELLS (I wish that New World had recorded that one, too.) Auto Accident is a pranksterish bit of hokum in which pitched percussion dominates, definitely a period piece but nevertheless delightful.

Pitch is also never completely abandoned in the Three Inventories of Casey Jones, a 1936 work by Ray Green (1909-1997), who perhaps today is most remembered for running the American Music Center from 1948 to 1961, the second longest tenure in the history of the organization. A few symphonic works by Green appeared on CRI LPs decades ago, and are now available through burn-on-demand CDs from New World, but Casey Jones is the first digital recording of his music to be commercially released. Its three short movements reveal the same breezy Americana of Green’s orchestral output, with the prominent unpitched percussion adding some additional spikiness.

Once upon a time, John J. Becker (1886-1961) was grouped alongside Ives, Cowell, Carl Ruggles, and Wallingford Riegger as the five leading American ultra-modernists. Although quite a few scores by him are in the archives of the American Composers Alliance, today if he’s remembered at all, it’s for a somewhat caricaturish yet still thrilling piece of exotica called The Abongo, also for percussion ensemble, which was recorded by New World back in 1979. Vigilante 1938 (from 1935), his only other percussion work, was written to accompany a dance by Diana Huebert for the Carleton Dance Group in Northfield, Minnesota. It begins ominously with a tam-tam thwack but soon emerges as something of a mini-concerto for piano and percussion, albeit a piano whose solo passages consist primarily of tone clusters.

The strangest inclusion on the current disc is probably Dance Rhythms (1935), a work by the important early 20th-century choreographer Doris Humphrey (1895-1958). Humphrey did not consider herself a composer and in fact could not read music. However, with one of her principal dancers, Charles Weidman, she worked out a sequence of rhythms typical of the movements she shaped in time. Wallingford Riegger translated it into music notation and the ever catholic Cowell embraced it as a piece of contemporary music. Experiencing it purely as music more than 75 years later, it retains sonic interest despite its relative spareness when compared with most of the other works featured here. Cowell’s own Return, which he composed while incarcerated in San Quentin (on a trumped up morals charge), is at times even more sparse, perhaps a response to his isolation. The work ends quite disarmingly with a vocalized wail from one of the players.

Finally, we come to Johanna Magdalena Beyer, who, after William Russell, was the single most prolific composer of percussion music in the 1930s and perhaps even more than Russell, presaged the contemporary percussion music soundscape. The fact that the earliest composer of truly contemporary-sounding percussion music was a woman is an undeniable challenge to the assumptions that unfortunately all too many people, women included, continue to harbor about female composers. Elsewhere on this site, there has been an impassioned refutation (as well as some extremely articulate rejoinders to the same effect from our readers) to Fiona Maddocks’s contention in the Guardian that we have yet to produce a credible “female answer to Beethoven.” Someone needs to mail Maddock’s a copy of this CD tout de suite.

Beyer not only has the requisite last name initial of B, but has a biography that in some ways matches Beethoven’s as well. She was also born in Germany even though her life as a composer, at least what we now know of it, only began after she emigrated to the United States in 1923. Like Beethoven, she composed a series of progressively challenging string quartets and also had a turbulent personal life involving an “Immortal Beloved”—in Beyer’s case, none other than Henry Cowell, for whom she harbored an obsessive infatuation which remained unrequited. While Beyer’s surviving compositions which are slowly surfacing on disc reveal a remarkably original voice, it is her percussion music that offers the greatest testimony in support of her historical significance.

The abstractly titled IV from 1935, with its relentless, throbbing insistency, creates an all-encompassing exotic soundscape despite lasting a mere two minutes. Percussion, opus 14 (1939), which requires an ensemble of 11 players—nearly as large a group as the 13 needed for Ionisation—is a portentous assemblage of competing rhythms. March from July of that year, calls for the largest instrumentation of any of these pieces—some 30 percussion instruments—although it is playable by as few as seven players. The composition’s oddball rhythm (4½/4), broad dynamic range, and periodic silences make it a march like no other. Similarly, Beyer’s Waltz, which was Beyer’s final percussion composition, confounds listener expectations by frequently juxtaposing a cross-rhythm of four against the triple meter.

The Three Movements for Percussion, whose individual movement names provide the title of this disc—Restless, Endless, Tactless—was dedicated to Cage and is perhaps the most experimental of all of her percussion pieces. “Restless” is a stern and somewhat ascetic waltz that is discernibly palindromic, that is to say it is identical forward and backward. “Endless,” which at ten minutes is longer than any other movement (or full work) included on this disc, is a study in endurance in which an almost metronomic tapping on the woodblock is interrupted irregularly by silences and groans from bass drum, suspended cymbal, and lion’s roar. In “Tactless,” a quintuple meter is made to sound even more off-balance by various counter-rhythms and metrical interruptions.

While the Three Movements for Percussion is her most fleshed out overall statement for percussion ensemble and might ultimately be her most important contribution to the repertoire, her earliest percussion work, the Percussion Suite from 1933, is also extremely worthy of canonization. Similarly parsed in three contrasting movements, the work opens austerely and quietly with overlapping layers of bass drum, Chinese blocks, triangle, tambourine, and cymbal. In the middle movement, a xylophone takes center stage, adding clearly melodic elements to Beyer’s otherwise pitchless haze, although the tunes Beyer forms are uncompromisingly chromatic and seemingly directionless. The concluding movement returns to the sobriety of the opening, with some of the same material here rescored for different instruments (including a rattle, tam-tam and castanets) and cast in a different overall metric pattern. (To get a clearer idea of how this all works, you can examine Beyer’s original unpublished manuscript for all three movements which Larry Polansky has posted as a PDF on his website.) The Percussion Suite is bursting with the feeling that a new land has been discovered, one which nearly eighty years later remains extremely fertile.