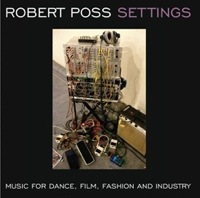 Purchase:
Directly from the composer

Lately quite a few people have been waxing nostalgic for the days of modular analog synths. Especially when hooked up to rows of guitar effects pedals, this set-up can make for hours of fun-filled electronic wanderings amongst forests of patch cords. There is still plenty of good music to be made from that recipe, and a cure for the nostalgia can be found in Robert Poss’s latest CD, Settings: Music for Dance, Film, Fashion and Industry. Although the fourteen works on this disc were made to be combined with other forces such as dance, they also stand on their own and together form an assortment of music full of interest and variety. Poss has performed with other luminaries of electronic music such as Nicolas Collins, Phill Niblock, and Rhys Chatham, and during the ’80s and 90’s played a significant role in creating the “wall-of-guitar” sound with Susan Stenger in the group Band of Susans. While those activities have clearly left their mark, he has melded them into music that is very much his own.

Three works for choreographer Alexandra Beller showcase the more delicate side of Poss’s music. Other Stories Interlude is a short work for bells, underscored by floating synthesizer sounds, which are joined by tumbling reversed guitar loops in the more driving The Structure. The third work, Feed Forward, is an intense conversation of elongated feedback tones and electronic grumblings.

With Music No. 2, created for another choreographer, Sally Gross, is a more rock-influenced work characterized by a driving rhythmic loop overlaid with sustained guitar tones that serve as a melodic line. At three minutes, the music grinds to a halt, shifting into a gauzy curtain of processed guitar, and then again into a tabla-esque percussion section. The other work for this choreographer enters a few tracks later as a live excerpt of The Pleasure of Stillness, bringing back the languid combination of chimes and layers of sustained electric guitar tones.

The other works on Settings, which are presumably the ones intended for “film, fashion and industry,” definitely exhibit cinematic leanings. The choppy, pulsating motion of Inverness is slightly sinister, while the sound of a flute softly doubled by bass guitar signals a complete change of pace in Stare Decisis. The flute gradually morphs into the sound of a marimba, and that is paired with reversed bits of scraping noise. Tourniquet Revisited is the most complex work on the disc, its well-wrought form carving a pathway for the listener through a labyrinth of string sounds.

And lest we forget what this music is truly about, the all-too-short final track, Robert Palmer Tribute Coda slams us back onto a giant brick wall of guitar noise—a little chaser after wandering amid Poss’s other inspired guitar concoctions.