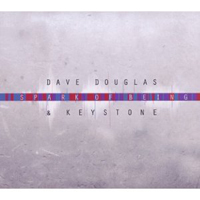 Spark of Being
(Greenleaf Music)

Spark of Being, a multimedia collaboration between composer Dave Douglas and filmmaker Bill Morrison, coincides with the one hundredth anniversary of the first Frankenstein film, a twelve-minute silent movie from Thomas A. Edison Studios. That Frankenstein, directed by J. Searle Dawley in 1910, is subtitled, “A Liberal Adaptation from Mrs. Shelley’s Famous Story.” (See the film on YouTube.) Spark of Being is a much closer adaptation, for Douglas and Morrison have managed, like Dr. Frankenstein himself, to create life from scraps of the used and rejected—sounds and moving images in their cases.

Morrison pieced his film together from archival and “distressed” footage—passages of film so badly used by time and indifferent storage that he cedes any remaining representational use to their increased power to convey abstract, emotional content. With suggestive, cobbled film and his reliance on the viewer’s familiarity with the story, Morrison fashions his wordless narrative.

Douglas sampled audio from Stanford University’s Center for Computer Research in Music and Acoustics to create an electronic soundscape that feels as deeply embedded in the film’s images as it does in the music made by the rest of the ensemble. This he includes in his compositions to accompany the silent film.

The music for Spark of Being lies in a unique area between music improvised for silent film and movie soundtrack, a new space that makes this collaboration and its results magical. Douglas wrote a jazz-based score with room for improvisations; the film “rolls” while the electric sextet, Keystone, performs the music live. The members of Keystone are: Dave Douglas on trumpet and laptop; Marcus Strickland, tenor saxophone; Adam Benjamin on Fender Rhodes; Brad Jones, Ampeg Baby Bass; Gene Lake, drums; and DJ Olive on turntable and laptop (although the night I attended the performance in Columbus, Ohio, Geoff Countryman substituted for Olive). (There are three CDs of music written for Spark of Being, all released on Greenleaf Music: 1. Soundtrack; 2. Expand; and 3. Burst. These can be purchased individually or as a box set with notes.)

It’s a struggle to find proper vocabulary for this work of art, because it draws wholesale on two well-established art forms yet fuses the two completely into something else. To speak of this work only as “a film” is incorrect. It’s not even a “film with soundtrack” in the usual sense (although Douglas does use the word “soundtrack” to describe his work). Although it remains a “silent film” for me, it’s in a very enriched sense. Because the fusion of sight and sound is so complete, it enters my mind “silently,” that is, as a single, whole event that lacks nothing. I compare this to a traditional silent film, which lacks sound. This is, I think, the greatest achievement of the collaboration.

In Dawley’s Frankenstein, as in most silent films, frames with captions tell us not only what is happening, but also how to interpret the mood and action. (E.g. “Frankenstein appalled at the sight of his evil creation.”) In Morrison’s film, we have not captions but chapter titles: “The Traveler’s Story” or “The Doctor’s Wedding.” Titles announce in the most general terms what will follow, and then the music and imagery create the narrative and its emotion. This is the way chapter titles work in literature.

By controlling the expectations for Spark of Being with this strong, traditional structure, Morrison and Douglas allow themselves maximum creative scope within their own media of film and music. The predictable authority of literary formality provides a stable context for artists and audiences alike.

Within this context, everything about Spark of Being feels loose and exploratory. Morrison gives us both documentary-style and abstract/distressed passages; black and white and luridly colored film; and slowed or sped up movement all as his mix of narrative devices. The film is in turns poignant, sad, thrilling, confusing, and filled with awe, disgust, or outrage. Yet we never wonder where it is all going.

Douglas’s music both intensifies and complicates emotions that are suggested visually. The score serves literally as the film’s “Spark of Being.” Without this score, the emotional content would be merely described. As the music is played by the musicians on the stage, the audience experiences emotion not as voyeurs, but as is it is felt in life: in several ways simultaneously, and not all of them consciously.

The music—scored and improvised—always responds to the content of the film’s chapters. Douglas’s music is programmatic in the simple sense that it reflects the action of the story in ways reinforcing or ironic. From chapter to chapter the music changes and its various aspects are emphasized: tempo, instrumental voicing, sampled sounds, rhythmic elements vs. lyrical ones, and so on.

Like the film, the music narrates the story. Douglas has created haunting lyrical themes linked to recurring story elements (such as “Creature Theme”). Douglas notes his connection with Miles Davis that listeners will inevitably hear in this score. (He furthermore tips his hat to Don Cherry, Woody Shaw, and a long list of young trumpeters including Taylor Ho Bynum, Nate Wooley, and Ibrahim Maalouf.) While “Milesian” may indeed describe accurately the long, lyrical phrasing, the settling in middle register, the unrushed tempo, and the trumpet technique, reference to Davis won’t explain why the approach is so well conceived for this project.

For, whatever the film’s pace, imagery, or mood, Douglas’s score floats its recurring calm themes through the action and images. The dreamy chromatic motives are tinged with a piquant combination of color and melancholy that transfers itself into the film. These chromatic qualities are furthermore supported by the cold electronic samplings. Some of the sounds—whistling wind, waves, birdcalls, whale songs (I presume)—remind us explicitly of the story’s Arctic frame and the snowy scenes we watch through the Creature’s eyes in the wintry “Swiss” mountains.

The relaxed, hopeful musical subjects glide over lines that change as continually as the imagery in the film. All the musical layers are colored with chromatic sound. The electronics and the drumming too are highly tinged with tonal variety (which may result from improvisation as much as from scoring).

Douglas’s top lyrical, mid-tempo line is set in contrast to many types of sonic layers: sometimes pools of shimmering sound, sometimes drumming that is deeply layered within itself, with a rhythm that drives as intensely as a musher across the tundra. The trumpet and saxophone melodies form a shuttle that pulls the dominant ideas through the multitextured weft of Spark of Being.

In his liner notes to the box set of CDs related to Spark of Being, Douglas writes that the project “began its life as a meditation on humanity and technology.” While both artists plumbed up-to-date technology in their media to create this work, the result does not feel to me like a statement about the good or evil of technology in human affairs.

It is more to the point when Douglas says that he and Morrison were “both interested in a collaborative piece about human invention: from the profound to the quirky, from the benign to the disastrous.” They do not interpret the Creature as a golem, stupid and unfitting, but more as Shelley wrote him: essentially human, grappling with the “desire to be whole.” It is “the sting of the creature’s wound at being spurned by his creator” that is the worst part of his life.

Shelley published Frankenstein only two hundred years ago, but its lasting power is actually rooted in her ancient sources: The novel is subtitled, The New Prometheus. The author was well aware that she was recasting the story—as old as art, as fundamental as human consciousness—of conflict between creator and created. Prometheus was the god who formed humans from lumps of clay and then gave them fire when they came to life. For his efforts, Zeus chained Prometheus to a mountain where an eagle feasted on his self-regenerating liver every day.

Douglas and Morrison contribute Spark of Being to a long tradition of meditations on the gift of life and the terrible shock of life; metaphorically, to the bliss and misery of being an artist. In fact, their joint approach—for all the media elements that place it in this very contemporary moment—evokes Greek drama. There is nothing violent or appalling shown on screen, an artistic decision that is refreshingly out of step with the tradition of Frankensteins. We are used to much being made of the horror of the monster’s creation and hideous appearance. Here we don’t even see the Creature for most of the film because we are looking through his eyes. When we finally view him, he appears only as a large, plain, awkward-seeming peasant: No one special. A person. By avoiding set pieces suggested by the tradition of retellings, Morrison and Douglas have, like tragedians, placed the horror ob skene—in the wings—allowing us to contemplate the story, in our own minds, leaving the shock and sorrow to the most poignant stage of all: imagination and our experience of our own feelings.

Perhaps the greatest beauty of Douglas’s writing is that it reflects this decision to give scope to the viewer’s inner vision. His melodic motives are so beautiful and easy to retain that they become instant memory, pervasive in the mind. The rhythms, tones, and electronically produced soundscapes that build the story and its emotional palette occur in a general context of temperance.

Musically, there are no lurid moments, nothing grandiose, or outrageous. This is not to suggest that the score lacks contrast or excitement: far from it. There are three-minute drum solos of astonishing speed, intensity, and color, in which Lake displays his virtuosity on a very large kit. There are passages when Douglas and Strickland blow like men possessed. Yet one never feels anything behind the performance of the music but respect for the story’s characters, for the audience, and for the other musicians making it. This is no doubt one result of combining score and improvisation. It obviously results, too, from artists who are doing what artists do: taking on life’s big questions.

This makes it clear why that Milesian cool evenhandedness was such a thoughtful choice on Douglas’s part. He could write anything he wanted, but he chose lyrical, moderate, and chromatic for the silent story of Frankenstein. It’s a gracious choice that reinforces the atmosphere of beauty in which the collaborators have reset the myth that has been so often cast in the grotesque.

If you look at that original 1910 silent film, you will hear screams and groans. Between Douglas’s music and Morrison’s moving images, sound and pictures deliver in Spark of Being a much more potent notion of story effectively told in silence.