The Trump Travel Ban unceremoniously strips citizens from the countries on its list of their humanity, essentializing them as stigmatized non-Americans and even actively anti-American. Now on its third iteration, the so-called Muslim Ban has suspended acceptance of certain refugees, blocked immigration, and revoked visas from a shifting list of countries. Immediately after the policy announcement, thousands gathered at major airports to protest and stand in solidarity with those now denied entry. This reaction is a snapshot of the larger and ongoing resistance to the Trump agenda that ranges from daily phone calls with congressional representatives to globally linked marches involving millions, with myriad activities in between. We need not move mountains to defend our values. By leveraging power and privilege within our own spheres of influence, however modest they might appear, we can all effect real and positive change.

We need not move mountains to defend our values. By leveraging power and privilege within our own spheres of influence, however modest they might appear, we can all effect real and positive change.

For Trump and his nativist advisors, one’s nationality alone is enough to trigger the end of a conversation. My colleague Ben Harbert and I consider it the start of ours. Using the resources available to us as faculty members of Georgetown University’s music program, we organized “Music of the Travel Ban” as a way to resist through music and through presence. The concert series provides a space for the voices from these banned countries to be heard as people, recognized as neighbors, welcomed as friends, and celebrated as a vital part of our artistic and intellectual communities. As a model for campus engagement, this series is our rejection of policies rooted in racist ideologies and reflects our unwavering commitment to a multicultural ethos. 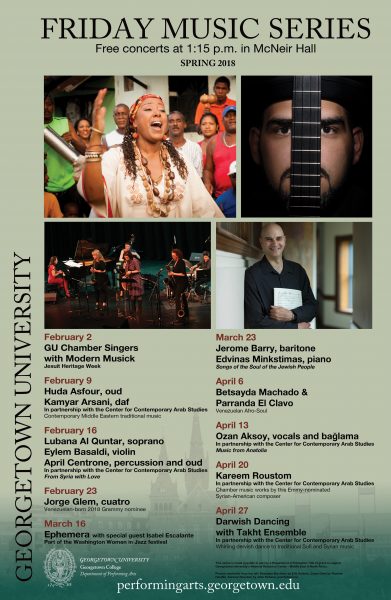 Within “Music of the Travel Ban,” resistance occurs in more and less predictable ways. As the motivation behind the entire series, the specter of the Travel Ban is ever-present and inescapable. Shockingly, however, none of the first three concerts appeared overtly political; the conversations between the audience and musicians during the performances and the subsequent Q&As were wholly devoid of Trump and of his policies. When the topic of politics finally emerged in the fourth concert, it came from the sphere of ally-ship rather than from those immediately affected.

And yet, the refusal to engage rhetorically with or even acknowledge these policies, despite their very real and disastrous consequences for performers and audience members alike, is a mode of resistance in its own right. It is imperative that we engage forcefully and directly in a fight against policies that we find unjust. However, in the specific context of our series—itself predicated on defiance of the Travel Ban’s broader agenda—the performers’ insistence on their right to share their music freely, and moreover that we focus on their music and not on their biographies or birthplaces, becomes paramount. This form of resistance is no less potent, and presents advantages for those more directly vulnerable under the current administration. The refusal to engage is a rejection of false categories rooted in propaganda rather than reality.

The very physical presence and proximity of the performers forces us to contend with human beings rather than abstracted ideals. The bodies on the stage in front of us defy and deny erasure. We watch them breathe and we see them perspire. They speak to us and we to them, and all the while their humanity is foregrounded, demanding that we reconcile the one-dimensional racist stereotypes this administration pushes with the living people we see. The message is unavoidable—policies impact people.

The multicultural influences embraced by these performers complicates the current administration’s reductive narrative of an evil other. This too is resistance. Multiculturalism—practiced here on the level of the individual—reflects the global ethos of the concert series. We’re confronted with the porous nature of artificial genre boundaries, the ease with which performers cross musical borders, and the compelling artistic reasons to do so. Through “Music of the Travel Ban,” we come to understand that a construct like “the music of Syria” is problematic, that defining something necessarily circumscribes and therefore reduces it. And just what does it mean to be of a place?

The series opened with a performance by Huda Asfour and Kamyar Arsani, whose music has a visceral, teetering-on-edge power coursing throughout. Its particular urgency doesn’t feel native to the classical Arabic traditions they both grew up listening to and eventually learned to perform. Instead, this rawness derives from their love of punk rock and their deliberate efforts to incorporate its attitude, aesthetic, and energy in their own music. By combining elements from these seemingly disparate genres, the duo successfully forges a musical identity that resonates strongly with a number of cultures without being bound to any of them.

Asfour and Arsani exemplify the multicultural in music in a very literal way when choosing to play “Bint El Shalabiya.” With early roots in Andalusia, which at the time housed Jews, Christians, and Muslims simultaneously, this tune spread throughout Arabic countries and beyond, appearing in Turkey, Palestine, Iraq, Lebanon, Iran, India, and Greece, among others. Asfour and Arsani discovered this cultural overlap during a fortuitous moment in a free-form jam and have since uncovered still more versions of the tune in additional countries. By explaining this intercultural context before performing their own version of the tune, the duo reminds us just how historically interconnected traditions can be.

Lubana Al Quntar, who performed on the second concert along with Eylem Basaldi and April Centrone, is in many ways a living realization of what musical multiculturalism can be. In addition to her extensive background in traditional Arabic vocal performance, the Syrian native is the first woman of her country to earn international acclaim as a professional opera singer. This allows her to create cultural overlaps where none seem to exist. Responding to Al Quntar’s performance of Puccini’s “Sola, perduta, abbandonata,” an audience member described the transformative impact the experience had on her own cultural understanding, saying, “I grew up very proud of Arabic music and thinking it was the best. But when I heard you sing the opera, I realized there was another side of you that couldn’t be expressed by Arabian music but needed the opera. I think it was very beautiful.” Nor was such an epiphany unique to this woman, or its direction exclusively from Arabic music to opera. Venturing beyond the dictums of genre opens up otherwise hard-to-access musical worlds. We tend to be receptive towards something new if we can understand it within the context of something familiar. Musicians like Al Quntar, who occupy these different musical worlds simultaneously, can help to facilitate this move beyond the familiar and into the new.

The solo act for the third “Music of the Travel Ban” concert, Jorge Glem, is a living legend on the cuatro, the four-stringed instrument that is so fundamental to Venezuelan culture that it adorns the walls of many homes throughout the country. Along with prodigious, forward-looking techniques, Glem’s revolutionary approach to the cuatro is defined by his ceaseless incorporation of different styles of music into the traditional repertoire. Describing how he cultivated his own style, Glem stated, “I felt it necessary to play on the cuatro what I listen to on the iPod.” He brands non-traditional music with a characteristic Venezuelan sound while simultaneously continuing to transform traditional music. One such multicultural mashup was Glem’s version of Nirvana’s “Smells Like Teen Spirit,” replete with blistering bebop solos redolent of Charlie Parker and accompanied by a “salsa army” of short, percussion-derived loops played on the cuatro and looped on the fly. By transcending both geographic and stylistic borders, Glem opens up new paths for Venezuelan music and for music globally.

Amy K. Bormet, along with Karine Chapdelaine and Ana Barreiro, led a cosmopolitan jazz trio on the fourth concert. Although a last-minute line-up change dissolved the explicit tie-in to the Travel Ban theme, this concert was the first to feature an open denouncement of the Travel Ban. Bormet used her position of privilege to speak as an ally, condemning Trump, his administration, and the Ban. Turning one of the conservative criticisms of migration on its head, she urged us to “be grateful for the people who’ve decided to come and live here.”

Even as her actions embody our idea of what commonly constitutes resistance, Bormet uses music to reinforce her advocacy. Prefacing her slow, contemplative performance of “America the Beautiful” by calling for all of us to “take ownership of our country,” Bormet challenged us to discover ways in which we too can advocate for our values. The deliberate inclusion of an established patriotic symbol like “America the Beautiful” within the “Music of the Travel Ban” series is a political statement, and one Bormet reinforced by speaking explicitly about the valuable historical and ongoing roles that immigrants play in our country. Trump’s vision of a beautiful America is a bleached one, the Travel Ban in full effect, a giant wall to our south, and all refugees, asylum seekers, TPS-holders, and undocumented immigrants summarily vanished. Bormet presents her vision of a beautiful, inclusive America through her framing of the tune so that we conflate “America the beautiful” with a “nation of immigrants.”

Music is a medium through which we share our cultural experience and share in the cultural experience of others. Its communal identity becomes a celebration of the I, the you, and the we. Through “Music of the Travel Ban,” we reflect on how we define ourselves as a country, how we reconcile ideas and ideals of freedom, brotherhood, and equality with religious persecution, racism, and systemic inequality. That these values have in practice never been as inclusive as they should have been does not make these latest aggressions any less egregious, nor suggest that we cease striving to reach these ideals.

“Music of the Travel Ban” arose out of the crossroads of frustration and incredulity, a speculative “what if” that grew into eight concerts, the first four of which I’ve described here. The near-constant shocks that blast throughout the country via indecorous and vitriolic tweets, blatant and continual lies, and an endless cycle of cabinet scandals keep everyone off balance and anxious. Some consider this presidency a storm to be weathered rather than confronted, but this only works as long as you’re not directly in its path. We hope our series will inspire others to consider again the resources available to them and to speak out against injustice when they encounter it. We all have a personal responsibility for this country’s trajectory; if we lay claim to its successes, then we must own its failures. “Music of the Travel Ban” is our proclamation to all that “you are welcome here.”