Three years ago, I graduated with a master’s degree in composition from Boston Conservatory and promptly began a job teaching English as a second language (ESL) there. I was lucky to get the position; the department was growing, but more importantly, I had identified a hole in the ESL curriculum. The problem was that non-native speakers were struggling to pass music classes—not for lack of subject knowledge, but for strictly linguistic reasons (mostly vocabulary). For example, many students knew what a treble clef was but didn’t know the word “clef.” However, in the course of three years of teaching, it has become clear that the challenges these students face run far deeper than any of us might expect.

I designed (and am constantly re-designing) a component of the ESL course taught at Boston Conservatory that I call Language of Music. There were no pre-existing texts for teaching second-language learners to use English to write and speak effectively and naturally about music, so I made my own. Aside from some bumps along the road, everything has gone swimmingly—curricular units on harmony have led to analysis papers about Schubert impromptus; discussions of culture have yielded fascinating observations on artists at the fringes of pop music, such as Björk and Beck; the issues surrounding the San Francisco Symphony’s 2013 strike were debated. Not all of my material has been pedagogically successful. I have revisited half a dozen times the question of how to teach the vocabulary of rhythm, and I have scrapped as many solutions. (It turns out that learning terms like “quintuplet” and “compound meter” does not lead naturally to a compelling discussion of Carter’s Third String Quartet.) Nevertheless, my students have continually demonstrated that they are keen thinkers, and I find myself constantly engaged by their contributions.

And still, a glaring problem remains: my students have tremendous difficulty with the seemingly simple task of describing a piece of music.

From my somewhat limited vantage point (the international student body at Boston Conservatory clocks in at around 140-150 of the roughly 700 enrolled, about 55 of whom take ESL any given semester), I can only venture a handful of cautious explanations. I’ll start with the most contentious: Because of the vastly different systems of music education in some other countries (most of my students are from East Asia), many students were brought up in learning cultures which do not emphasize discussion and reflection as part of the music curriculum. The task of describing music is one we take seriously in American music education; dry, literal writing is favored only for a few specific forms (analyses, for instance, and even its appropriateness there is debatable), and that style is much different than the colorful language and openness many of us tend toward in classroom discussions, pre-concert talks, program notes, reviews, and blog posts. Take, for instance, this quote from Michael Steinberg’s 1995 program notes to Mahler’s first symphony:

Mahler likened the opening of the finale to a bolt of lightning that rips from a black cloud. The ensuing violence is suspended for some magical minutes as Mahler gives us the gift—in the soft pillows of D-flat major—of one of his most inspired lyric melodies.

Like it or not, this is what much of our music writing (not to mention speaking) resembles. Our music education culture regards the ability to communicate verbally about art as perhaps equal in importance to actual artistic expression. It is convenient to attribute my students’ woes to these cultural differences, but it is dangerous to remove the individual artist from the equation.

A second explanation—that the students are just being lazy—may seem more plausible, but I find it unsatisfying. Remedial courses do not always inspire active and engaged learning, but I’m not buying this. Less-than-stellar effort is often a symptom of busy class schedules and preoccupation with instrumental practice, but the trend of poor musical description is too widespread to be attributable to work ethic.

I am now starting to consider a third possible reason for my students’ difficulties when describing music. Linguistic relativity is commonly known as the Sapir-Whorf Hypothesis, and holds that language and linguistic usage affect non-linguistic actions and thoughts. An example of this hypothesis can be found when comparing the musics of Japan and the West. Many Western languages build sentences out of the subject-verb-object paradigm, establishing a goal orientation. Japanese, on the other hand (and Korean, for that matter), saves the verb until the end of the sentence. Some scholars have used this de-emphasizing of linguistic action in Japanese to account for the seeming directionless quality of Gagaku (ancient Japanese court music). The relationship between nouns in Japanese can be seen as stronger than in English, while in the West we focus on the deed being committed upon or against those nouns. (By this reading, verbs equate to music direction or development, while nouns are material). While Sapir-Whorf has been criticized for failing to take into account individual predilections in language learning and use, there may be some application to my students. I am not talking about how the Korean, Mandarin, and Japanese languages are structured. Instead, I am referring to the learning process that every second-language student undergoes, and its affect on communication. I’m no linguist, but it strikes me that a limited vocabulary will necessitate limited discourse; this, in turn, will lead to simplified reactions and opinions. As language learning becomes more difficult, the mind might opt to filter stimulus through a lexical sieve. (Pop culture case in point: Facebook’s paint-by-numbers emotional statuses for those unwilling or unable to name their own.)

Looking for more Education Week content? Go to the index.

This all occurred to me when I noticed that over the course of a semester spent identifying and building formidable lexicons with which to talk about music, many of my students would latch on to around five adjectives, which they proceeded to use gratuitously. I once described a passage in a Stravinsky work as “angular,” which many students noted in their books. For the rest of the semester, two students routinely referred to nearly all music as angular, including pieces which simply didn’t warrant this assessment. This is not simply misuse, but instead an instance where an inability to name a concept means resorting to other vocabulary, which in turn obscures the concept in the mind of the speaker.

As a composer, this conclusion has significant ramifications. Throughout our careers—with our teachers, our students, our audiences, and ourselves—we are thrust into situations where we must negotiate music verbally. Is it possible that we, the composers, misunderstand each other more than we think? That our confusion goes beyond the semantic and into the realm of individualized cognitive categories? A few simple examples would include words like “political,” which is often used for any music referential of non-musical human activity, or “complex,” which is clearly relative. Deeper than single words, however, is the meaning we bring to each word. Complexity may carry with it a value judgment (case in point: the way people feel about Brian Ferneyhough), which in turn will affect our efforts as we strive to make valuable art. If I find Ferneyhough’s “complexity” off-putting, my mind will establish a negative association with certain rhythmic proclivities. Meanwhile, had I never seen the scores to his works, I might find the experience of listening to, say, String Quartet No. 4 quite a serene (i.e. not complex) event. This is only a misunderstanding with myself—imagine what the result will be when this is compounded with another person’s understanding of “complexity.”

That’s where I am today. I am beginning to turn toward more linguistic research to find ways to help my students express themselves. The danger for native speakers is not to let English learners’ use of language strike us as simply a cosmetic blemish. We tend to identify their challenges with communication as part of English’s steep learning curve and we discount their mistakes as errors, but they may have established legitimate (if semantically incorrect) meaning out of their vocabulary.

Still, while the uphill battle my students face in the United States may be long and difficult, it is not an insurmountable obstacle. Just today, as we were wrapping up a discussion of Steve Reich’s Piano Phase, and the effect of the work as a whole, a student raised her hand to offer a single-word assessment of the final return to unison at the end of the work: “Loneliness.” I never would have heard the piece like this, but seeing that she had found truly the best way to articulate her feeling, and that she was indeed using the word correctly, I immediately recognized that I couldn’t have said it more elegantly myself. 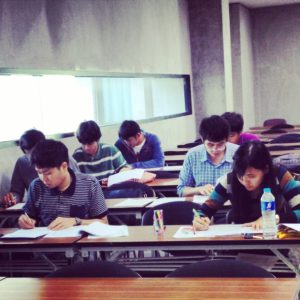 ► ▼4 thoughts on “Speaking of Which: Musical Expression in a Foreign Language”