Every year during the week before Christmas, thousands of music educators, student musicians, and industry professionals gather in Chicago to discuss the latest trends and techniques in music education, listen to top-level ensembles from around the world, hear newly available repertoire, and peruse the expansive exhibit hall at the Midwest Clinic. The largest international band and orchestra conference in the world, this event is truly a spectacle. The four-day conference is packed with panels, presentations, concerts, reading sessions, and promotional goodies that attract close to 20,000 attendees, including many band directors. For composers, it is an exceptional networking opportunity simply due to the sheer number of conductors present. And if you are lucky enough to have your music performed, it will be heard by thousands of band directors from throughout the country who are seeking out new pieces to program.

If you are lucky enough to have your music performed at the Midwest Clinic, it will be heard by thousands of band directors.

I had been considering attending the Midwest Clinic for a while, but I wasn’t quite sure where I would fit into the mix. I’m not a band director, and I only have two band pieces in my catalog, so I’m not sure I can even call myself a “band composer.” Was it worth going?

While still on the fence, I was pointed to a Facebook post from composer John Mackey–a veritable superstar of the band world. Due to Midwest’s policy requiring publishers to buy advertising space if two pieces of music they publish are performed in showcases there and a booth in the exhibition hall if they have three or more, Mackey had purchased a booth in the exhibit hall and was offering it up, free of charge, to self-published composers who are people of color and/or identify as women. I was shocked and delighted, and I immediately jumped at the opportunity! Not only was this offer incredibly generous (booth space is not cheap!), it recognized what I already suspected before even venturing to the festival: the Midwest Clinic has a diversity problem. 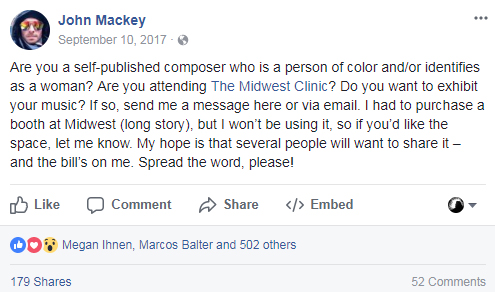 As you enter Chicago’s massive McCormick Place convention center and ascend the escalator to register for the conference, you are greeted by larger-than-life banners honoring current and former festival award winners, and a giant, cylindrical “wall of fame” covered in photos of even more award winners and board members from throughout the conference’s 71-year history–all but a small handful of whom are white men. Such a display can feel a bit unwelcoming for those who do not look like the men in the photos, and it is disappointing to consider that the movers and shakers of the Midwest Clinic, with their impact on music education nationwide, do not reflect the diversity of the students in our schools.

But the Midwest Clinic has a diversity problem.

Beyond the leadership, Midwest Clinic’s programming is equally in need of modernization. After my second day at the conference, I realized that not a single one of the concerts I had attended included a female composer. Now, it would be impossible to see every concert at Midwest, and I had experienced just a handful of the performances. Was it a fluke that I had missed the pieces by women? To be certain, I pored through the festival program and found that of the 500 pieces performed at the Midwest Clinic by 51 different ensembles (including bands, orchestras, jazz bands, and chamber groups), only 23 pieces (4.6%) were composed by women, and just 71 (14.2%) were written by composers of color.

But what about the band concerts on their own? With such enthusiasm for new music, surely the wind ensemble programming would be more diverse than that of the orchestras, right? Alas, of the 212 pieces performed by bands during the Midwest Clinic, only seven (a measly 3.3%) were written by women, and 26 (12.3%) by people of color.

Sadly, none of this came as much of a surprise to me. I’ve been performing in winds bands since the fifth grade, and I continue to do so today. Through the years I’ve become keenly aware of the white male dominance both on the podium and in the repertoire. In fact, the performance of one of my works by a wind ensemble last year marked the first time in more than five years that this particular group had played a piece by a woman. This dilemma is not unique to the Midwest Clinic, but a festival of its magnitude and influence has the potential to create meaningful change in the diversity represented in music education settings throughout the nation.

Luckily, members of the music education community are stepping forward to do just that, and it seems that things are slowly changing. For the first time, this year the conference included three clinics pertaining to diversity and inclusion. Tremon Kizer, associate director of bands at the University of Central Florida, offered an overview of various wind band repertoire by minority composers; Minneapolis-based music educator Adrian Davis gave a presentation on the underrepresentation of African-American males in music education, examining recruitment and retention from K-12 to professional levels; and a discussion on equity and inclusion in the music classroom was led by a diverse and illustrious panel of music educators. And of course there was John Mackey’s booth in the exhibit hall, taken over by underrepresented composers and generating quite a buzz throughout the convention center.

Luckily it seems that things are slowly changing.

Thanks to Mackey’s offer, nine of us showed up to exhibit our music together at a shared booth sponsored by Mackey’s publishing company, Osti Music. The participants were Erin Paton Pierce, Kevin Day, Evan Williams, Nicole Piunno, Haley Woodrow, Denzel Washington, Jennifer Rose, Omar Thomas, and myself. We took shifts working the booth, during which time we could display our scores, share recordings, and chat with conference attendees. The reaction from visitors was overwhelmingly positive; band directors are eager for new, high-quality repertoire to perform with their bands. While some people were initially confused that there was no music by John Mackey at the booth, they were almost always content to discover something unexpected from the composers who were present. Other visitors claimed they simply had to stop by to see what all the fuss was about. Apparently, this kind of booth-sharing has never been done at Midwest before, and there was even some confusion over whether it was within Midwest Clinic’s exhibit hall regulations. In the end, all the rules had been followed and we forged ahead. 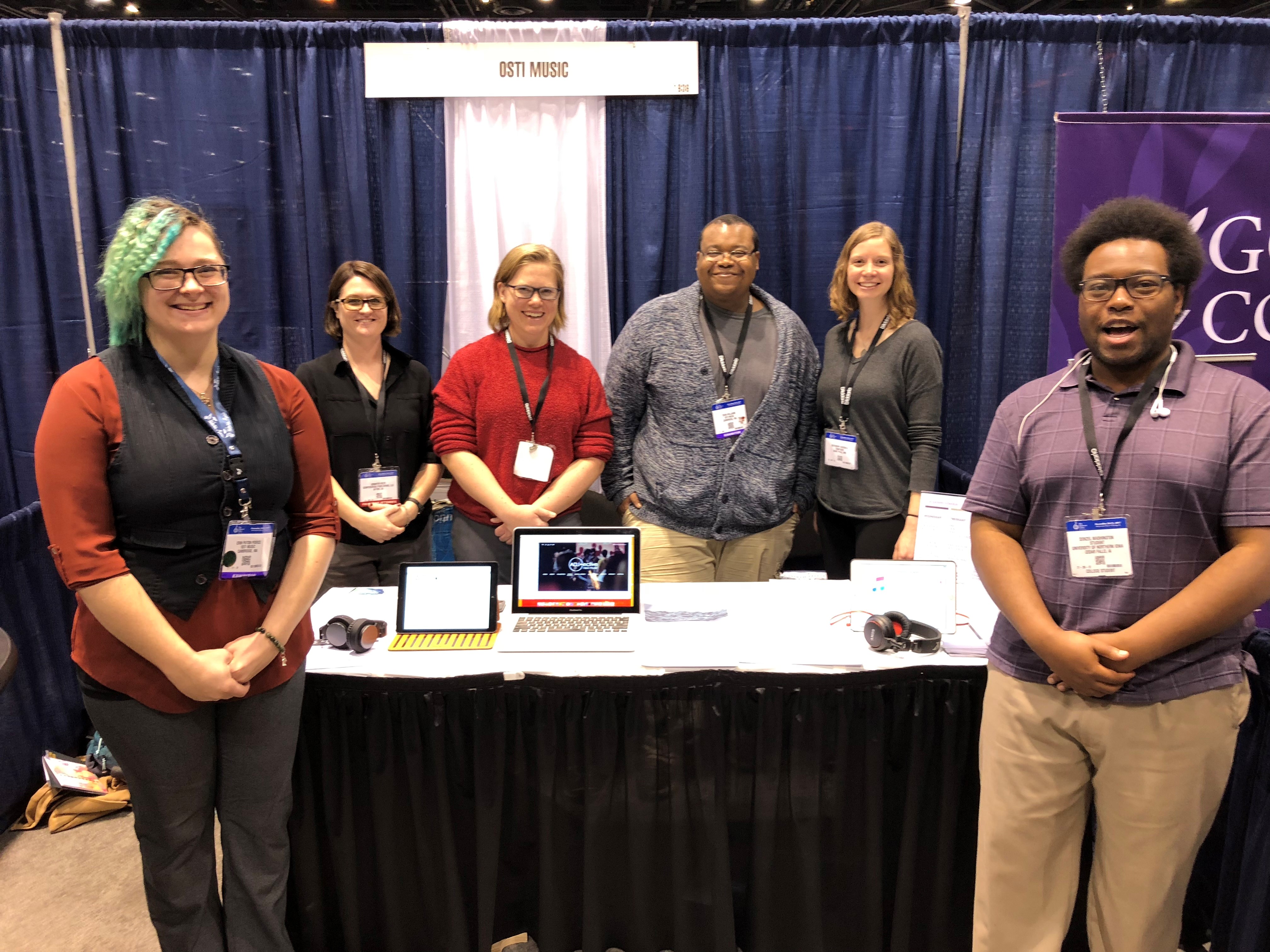 Away from the exhibit hall, our participation at the Osti Music booth was an easy conversation starter when networking with band directors, and it provided an extra layer of legitimacy for those of us mired in impostor syndrome. Between my shifts at the booth and networking throughout the conference, I made numerous new contacts with potential collaborators and fellow composers, sold a few scores, and even recruited some new members to a consortium commission I’m organizing. On top of that, I heard impressive performances by ensembles ranging in age from middle school to professional, learned about current trends and needs in music education, and discovered a thrilling assortment of music from my new composer friends.

All in all, attending the Midwest Clinic is an outstanding experience for composers of music for wind band. And while an air of exclusivity remains intact throughout the conference culture and programming, the tides are slowly turning. The messages of clinicians addressing issues of diversity and inclusion are now being heard, and John Mackey’s generosity in sharing the Osti Music booth set an incredible example of what it means to be an ally to underrepresented composers. I hope that this shift will continue, and I’m eager to see what kind of impact these efforts will have over the next few years at the Midwest Clinic and in instrumental music programs throughout the country. 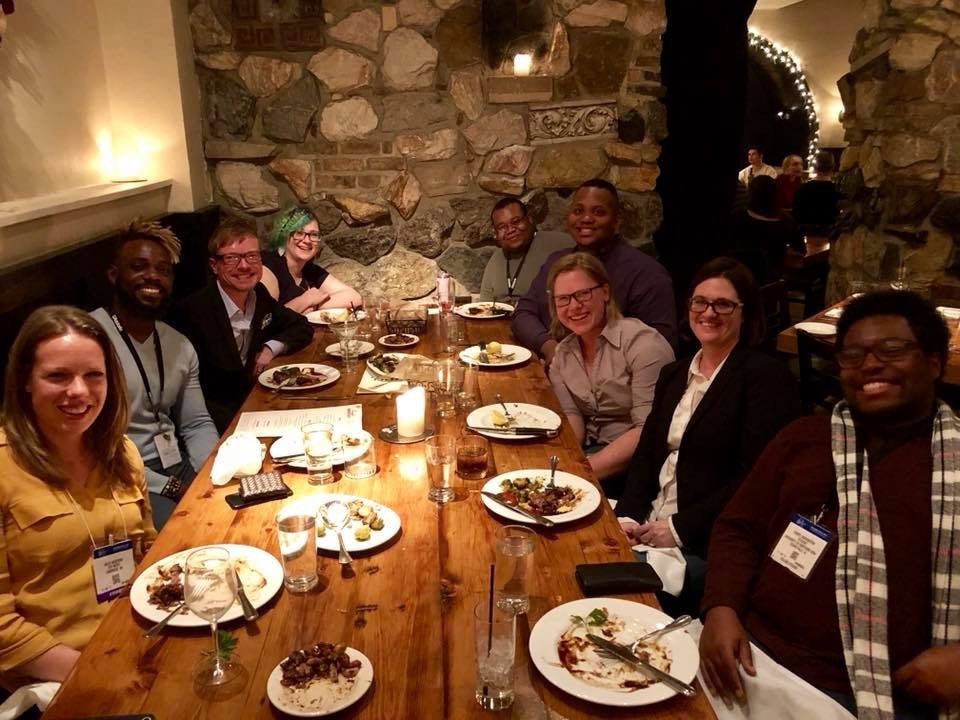 Our group of “Osti Music” composers had a celebratory dinner with John Mackey.

Katherine Bergman is a Minnesota-based composer who draws on literature, environmentalism, and found materials to create music that has been described as hypnotic and visceral. She has received commissions and performances from leading ensembles throughout the United States, including the U.S. Coast Guard Band, Encore Wind Ensemble, Duke University Wind Symphony, Zeitgeist, Seen/Heard Trio, the Minnesota Percussion Trio, The Dream Songs Project, and many others. Her works have been presented at the North American Saxophone Alliance Biennial Conference, The Midwest Clinic, College Band Directors National Association Conference, and The Upper Midwest... Read more »

► ▼One thought on “Stepping Forward at the Midwest Clinic”