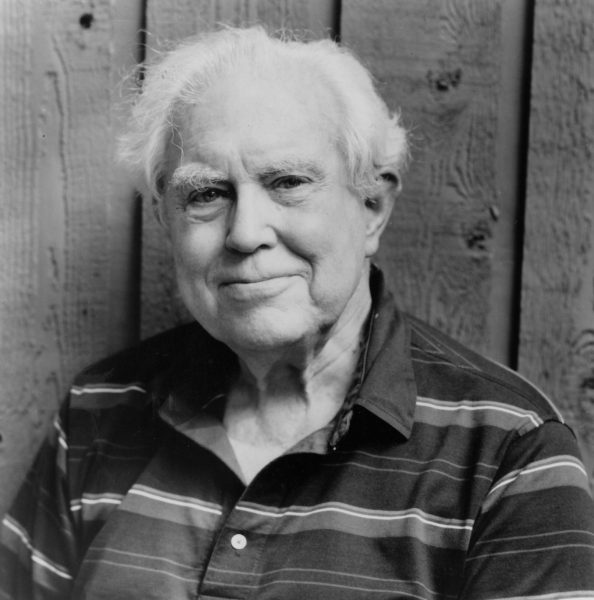 More than 17 years have elapsed since I visited Elliott Carter at his Greenwich Village apartment for the very first time to record a conversation with him for NewMusicBox. But I still remember that day very vividly, as well as many of the things he said.  I also remember several weeks beforehand being extremely terrified at the prospect of having a lengthy discussion with such a formidable figure, feeling inadequate in my understanding of Carter’s music and therefore not up to the task. He had written several compositions I had barely grasped, such as the turbulent Piano Concerto which received its world premiere in Boston half a century ago this year. There were also so many compositions.

Although for decades Carter had a reputation for writing music at a meticulously slow pace, he had begun to be much more prolific after his 80th birthday. He had composed almost as many works between 1990 and when I met with him in February 2000 (37) as he had in the four preceding decades combined (39). (He had turned 91 only a few months before I came to see him and would go on to create another 69 pieces in his remaining 12 years.)

At the time of our talk, Carter was chiefly known and venerated for the extremely complex and erudite works of what is now called his middle period—works such as his Pulitzer Prize-winning Second and Third String Quartets; the Double Concerto for Piano, Harpsichord, and Two Chamber Orchestras which wowed Stravinsky; the overwhelmingly immersive Concerto for Orchestra; and that Piano Concerto I had been afraid of which was something we actually discussed that afternoon. At the time of our talk, I had more of a fondness for what was then Carter’s more recent music—pieces like his dramatic Violin Concerto (which won a Grammy for Best Contemporary Classical Composition in 1994); the unusual Luimen, scored for what was probably the unprecedented combination of trumpet, trombone, vibraphone, mandolin, guitar, and harp; or his first and only opera, the surreally quirky What Next?, which we did manage to talk about a bit. Carter had also composed a great deal of music before the works for which he became known, and I wanted to learn more about that music, too—works such as the Americana-infused Holiday Overture and the Symphony No. 1, which rivals contemporaneous symphonies by Aaron Copland, Howard Hanson, Roy Harris, and William Schuman. Carter had also written tons of choral works. Some of those pieces were actually the first music of his I had ever heard, though they were all written in a style that, by the late 1940s, he had completely abandoned.

A personal aside: I actually met Carter for the very first time on April 17, 1979, when the Gregg Smith Singers performed two of his works at St. Peter’s Church in Manhattan’s Citicorp complex. My high school music teacher, Lionel Chernoff, suggested that I go to the concert. I actually still remember the 14-year-old me shaking hands with Carter, enthralled by this senior composer who was there as he always was when his music was performed. At the time I never imagined he would live for more than three decades after my initial encounter with him. Nor did I imagine after finally visiting his home for that first time on February 4, 2000, that he would go on to compose what I believe to be even more extraordinary pieces: works such as the mesmerizing solo piano miniature Caténaires; the almost Feldman-esque string orchestra piece Sound Fields; or the extraordinary Cello Concerto which he had just begun contemplating. He mentioned this composition briefly during our talk that day. (Yo-Yo Ma would later have to learn it traveling cross-country on a bus after the nationwide airport shutdown following the September 11, 2001 terrorist attacks.)

When Carter was a teenager, he was already deeply entrenched in the avant-garde milieu of his day. Much has been written elsewhere about his legendary and somewhat problematic relationship with Charles Ives, but Carter also told me about hearing lots of works by Edgard Varèse, as well as sitting next to George Gershwin during the American premiere of Wozzeck. He also talked about how we helped organize the American Composers Alliance when he was in his late 20s. In addition to his deep involvement in music, the young Carter was also an avid fan of literature (he was actually an undergraduate English major at Harvard), and literature remained a passion throughout his life.

After our talk, I was more fascinated with Carter’s music than I had been before and remain so to this day. Hearing him explain his conceptions for some of his more “difficult” pieces, I came to a greater understanding and appreciation for everything he had written and why he chose a singular, uncompromising path as a composer. I now deeply treasure everything he ever wrote, including his most challenging vocal works which the fearless soprano Tony Arnold wrote about for us in NewMusicBox back in 2011. Eight years after my extraordinary initial afternoon at Carter’s home, I had the privilege of returning there to talk with him again shortly before his centenary, by which point he had composed 45 more pieces! While I remain extremely proud of both of these talks, I am even more deeply in awe of a talk that Carter’s one-time student Ellen Taaffe Zwilich did with him when she was composer-in-residence at Carnegie Hall, as well as the collegial conversation between Carter and one of his biggest super-fans—believe it or not—Phil Lesh of The Grateful Dead, which we recorded for Counterstream Radio ten years ago.

It is now five years since Carter died, and it has inspired a great deal of reflection about his status today and what his lasting influence might be in our ever more splintered world.  I think that at the end of the day, his music, all of it, is a celebration of life—its marvelous ambiguities as well as its simultaneities, chock full of wit and humor and, ultimately, a reverence for its possibilities. And I do mean all of it—from his earliest unpublished song “My Love is in a Light Attire” (1928) to his withdrawn 1937 String Quartet in C Major written shortly after his studies with Nadia Boulanger (a page of which, from Carter’s original manuscript housed at the Paul Sacher Foundation in Basel, Switzerland, was tantalizingly reproduced in the 2008 book Elliott Carter: A Centennial Portrait in Letters and Documents); from his joyous Tarantella for male chorus (1936) to his iconic 1948 Cello Sonata; from his 1955 Variations for Orchestra, which would be his sole exploration of the 12-tone method, to his perplexing Elizabeth Bishop-texted song cycle A Mirror on Which to Dwell (1975); from his seminal Eight Pieces for solo timpani (1949/1966) to his solo clarinet showstopper Gra (1993); from his whimsical second wind quintet Nine by Five (2009) to his enigmatic final work, the just-recorded piano trio Epigrams (2012). And I’m still just scratching the surface. Hopefully our reflections here will inspire many further musical explorations.

Ed. note, as per the way NewMusicBox presented larger format articles back in the year 2000 (both to accommodate much slower bandwidths and to encourage non-linear reading), the talk with Elliott Carter is broken into eight separate pages. Each of these pages also includes audio/video elements so please take time to journey through them in whatever order you prefer, though they are listed below in the order in which the original conversation took place.

Throughout November 2017, NewMusicBox is marking the fifth anniversary of Elliott Carter‘s death with a series of posts exploring his life and legacy. This content is made possible with the generous support of the Amphion Foundation‘s Carter Special Projects Fund.