As China enters a new era of modernization and globalization, musical exchange becomes an increasingly pressing matter. While a news outlet may express certain views or statistics on trade, there is very little effort made to bridge the gap in cultural understanding. This is where the intersection of Chinese traditional music and new music has the potential to play an important role. 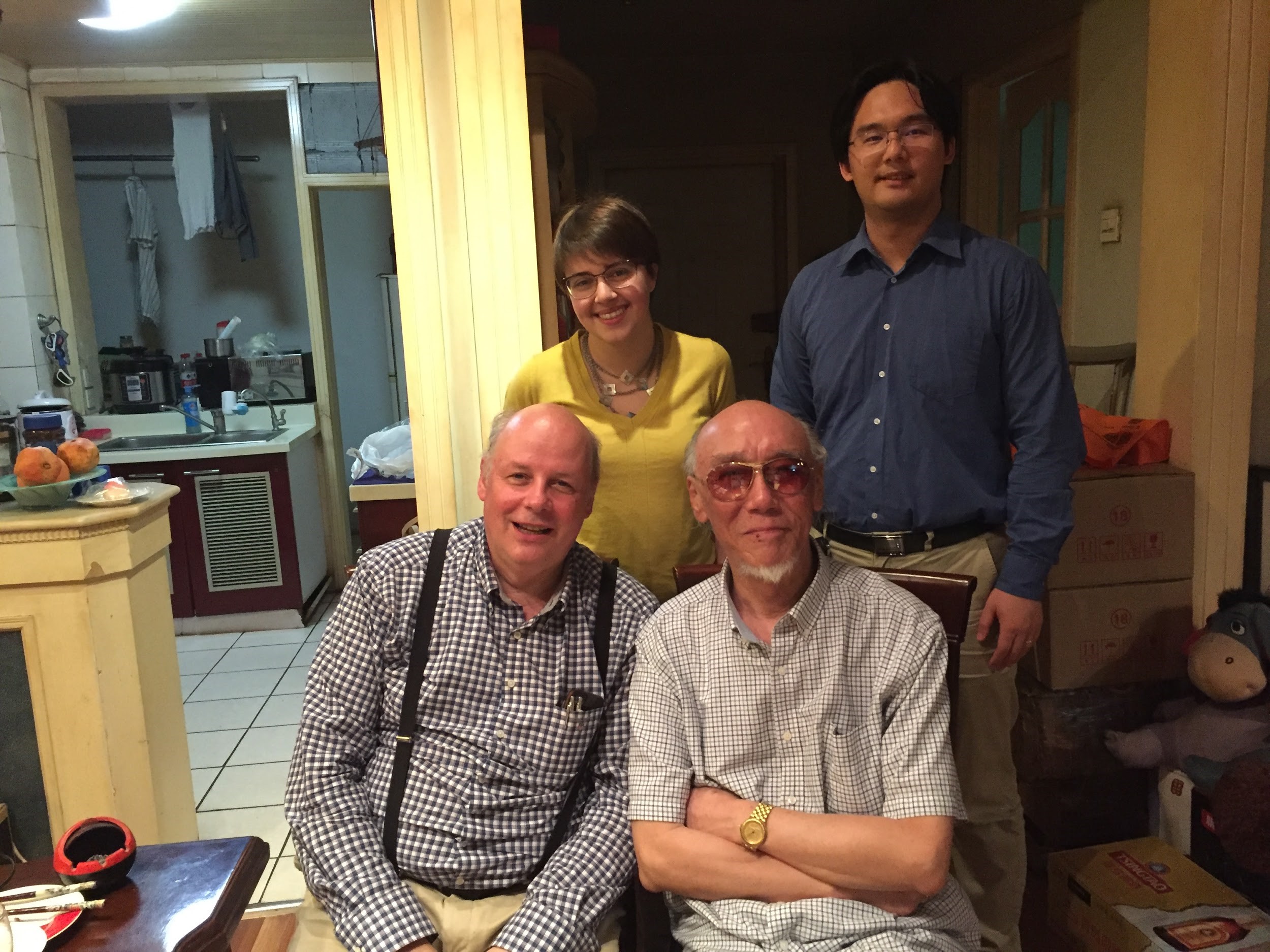 One Chinese composer who has centered his life around the concept of exchange is my mentor, Gao Weijie 高为杰. Having turned eighty this year, Gao Weijie is of a slightly older generation than many of the composers who had the chance to go abroad to study following the Cultural Revolution. Yet, he emerged from this period with a mission to learn as much about the music of the world as possible.

While a news outlet may express certain views or statistics on trade, there is very little effort made to bridge the gap in cultural understanding.

A principle vehicle for this was a composer collective he founded in Chengdu called 作曲家创作探索会 Zuoqujia chuangzuo tansuo hui (Composers’ Association for the Exploration of Compositional Creations), whose earliest activities date from 1983.

In the words of Gao Weijie:

The group had two main objectives:

1. To study and write about music from outside of China, of which we knew next to nothing. As this was the period in which China was just opening up, it was necessary to learn as much as possible and to commit ourselves to the study of technique.

Our resources were in newly-arrived analysis texts—from Allen Forte, Schenker, and others—as well as what we could obtain from the large publishing houses. Composers who traveled abroad would bring home scores from overseas. Additionally, Western composers began to come to China around this time. The first of these was the English composer Alexander Goehr, who in 1982 came to Beijing, bringing with him many scores from Schoenberg and thereafter.

2. The second motivation of the Zuoqujia chuangzuo tansuo hui was composer exchange. The concerts were few and far in between—often, we did not have the money—but through sharing scores and discussing the pieces, we learnt from one another. When someone’s piece was performed and there was a recording, we would all listen. These activities and research took place not as students, but in our free time as amateurs driven by passion.

Gao Weijie’s knowledge of both Chinese and Western traditional and contemporary music is parallel to few. He has spent his life writing both music and theoretical articles while teaching composition in order to share what he has amassed. His apartment is full of scores, recordings, and posters from concerts past; in fact, he has had to compile a handwritten library catalogue just to keep track of everything. 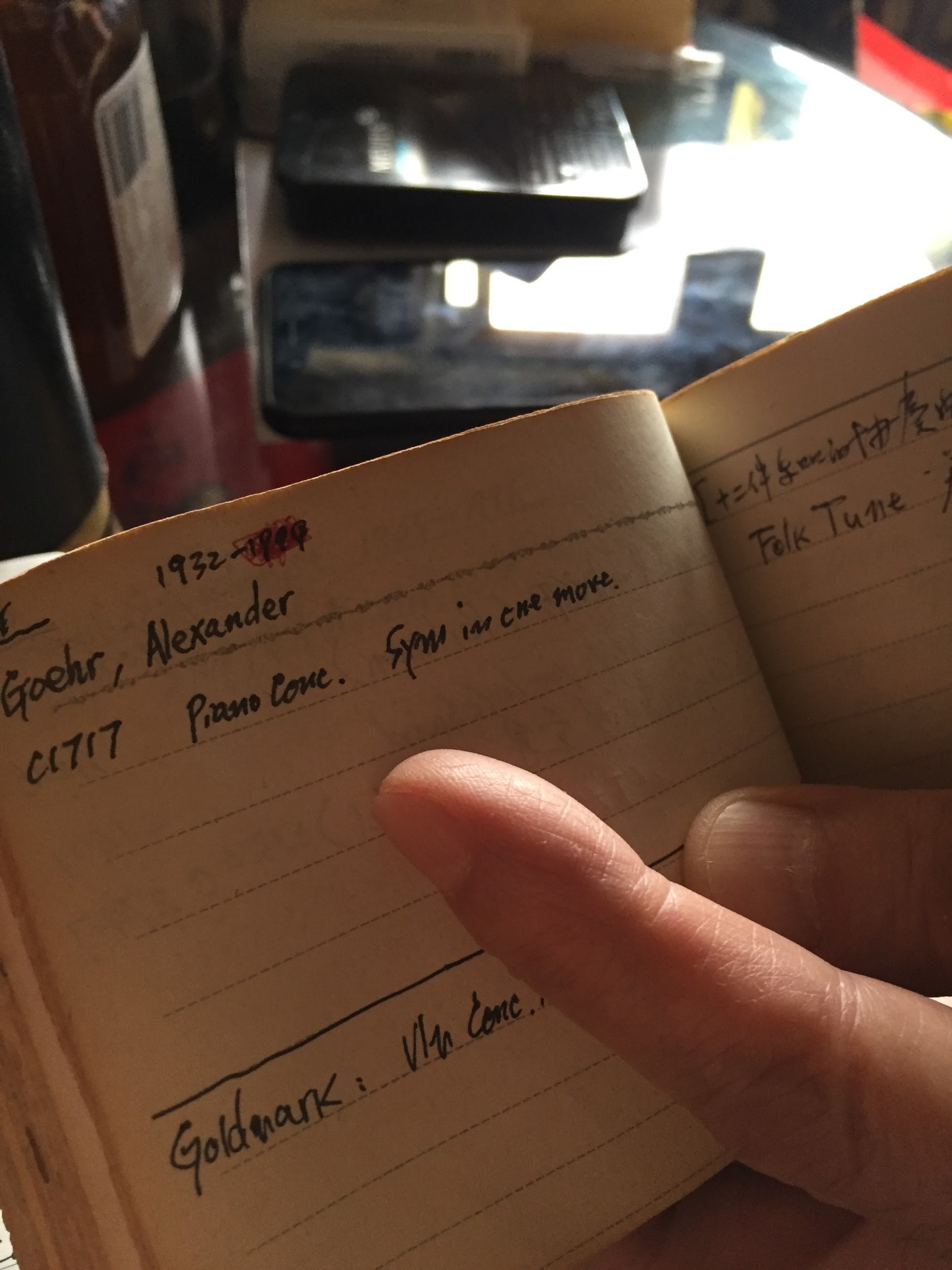 Gao Weijie’s drive to learn has not slowed with time. His most recent work, Flying Apsara 飞天 (2018), is scored for Chinese folk orchestra and takes its inspiration from the Qiuci (Kizil Cave) Frescoes in China’s Xinjiang Province. It will be premiered this coming October in a tour across China.

A representative example of Gao Laoshi’s work can be heard in his Origin of Dream I for dizi and Western flute:

launch gallery
Many exciting composers and performers across the world are engaged in related intercultural spheres.

Gao Weijie’s son, composer and pianist Gao Ping 高平 is one of the most important Chinese composers of the younger generation and likewise been active in creating musical exchange. Having previously lived in the United States and New Zealand, where he taught at the University of Canterbury, he is now the Chair of the Music Department at Capital Normal University in Beijing. Gao Ping’s wife Wang Wei splits her time between Beijing and Chengdu and runs an organization which arranges concerts and art exhibitions across the country. Through their joint efforts, they have built a musical bridge between performers in New Zealand, China, and the U.S. In October of this year, they brought over the New Zealand String Quartet for several concerts; the program included Gao Ping’s work Bright Light and Cloud Shadows 天光云影 (2007) alongside pieces by other Chinese and New Zealand composers.

Another interpretation of exchange can be found in the purely compositional construction of a piece. Composer Wenhui Xie’s 谢文辉 work as slow as… 时间片 (2014) for guzheng, piano, and dizi/xun uses elements of improvisation and indeterminacy to build performer-composer dialogue. This conversational approach is strengthened through Wenhui’s inclusion of herself as a pianist. This piece of Wenhui’s was one of the earliest compositions I heard for Chinese instruments and the one that made the greatest impression upon me at the time.

In addition to the aforementioned Chinese composers based in Mainland China, I have had the chance to interact with many exciting composers and performers across the world who are engaged in related intercultural spheres. Australian composers Corrina Bonshek and Bruce Crossman both take inspiration from Asian musical traditions and work with traditional Chinese instruments; American composers Joel Hoffman and Rob McClure have worked in China and engaged with Chinese music; Chinese and Taiwanese composers now living in the United States, including Huijuan Ling and Chen-hui Jen, are creating exchange through their varied artistic practices.

Simple matters such as differences in internet usage and promotion render it difficult to know what is happening in the U.S. or in China.

While the compositional activity in China today is vital, there are several challenges facing the exchange of contemporary music. Simple matters such as differences in internet usage and promotion—Youku versus YouTube, Douyin versus Instagram, WeChat versus Facebook—render it difficult to know what is happening in the U.S. or in China if one is not already aware of it. Language presents a related barrier, as there is insufficient translation of the texts and articles on contemporary music which are published in China. Once one speaks Chinese and lives in that world, it is accessible, but that requires a not-insignificant time investment. There are further differences in the logic behind presenting organizations and musical taste at large. Chinese audiences are, in my experience, quite conservative. After the premiere of my orchestral work Haumea with the Tianjin Symphony Orchestra in 2015, a woman approached me and reprimanded me for using such “extreme and unbearable” harmony—in what was, in my opinion, a moderately tame piece compared to much modern music.

This conservatism perhaps stems from differing prioritization in educational models. While Gao Weijie acknowledges the merits of focusing so much on traditional musical elements, he also admits that many students have insufficient exposure to contemporary works. (I remember my shock at the beginning upon discovering that most of my adoptive sisters and classmates at China Conservatory had not heard of even the most famous living composers.)

This year’s joint presentation of the Beijing Modern Music Festival and ISCM perhaps opened a new chapter for dialogue with China. While the understanding of Chinese music and exchange is still relatively small, there is steady progress being made.

Gao Weijie’s thoughts on this matter are as follows:

Today, the outside understanding of China still has many limitations. At the same time, more and more Chinese are interested in the outside world and living abroad.

Ultimately, culture across the world requires more exchange. Chinese contemporary music must continue to innovate and develop, connecting back to Chinese tradition while still being in touch with the rest of humanity. I hope that more and more Western composers can engage in exchange: research, performance, and composition. It is in this way that we can come to integrate ourselves with the world.