“I wish to enjoy music without the infusion of political opinion.”

This is an actual recent quote from someone in the classical music community. I’ve heard variations of this kind of statement throughout my own career: Why don’t you just write music? Why does it have to be so… political?

There has always been a desire on the part of artists to respond to the issues of the moment.

These invectives against “political” music seem to stand out more due to our current contentious climate, which may create the impression that there has been an uptick in the number of modern pieces with a political orientation. But the truth is that there has always been a desire on the part of artists to respond to the issues of the moment. This is particularly true in opera, the field in which I have done the majority of my own work. Opera has historically been a populist art form (please read Lawrence Edelson’s essay on the topic for more detail), and as such, composers and librettists have tried to create stories that reflect the concerns of their day. As opera companies began to focus more on a small selection of “canonical” works rather than contemporary compositions, the works in the canon became detached from their historical contexts. As a result, we have lost sight of how revolutionary these works actually were for their time.

Operas like La bohème showed the lives of ordinary people rather than kings or gods.  Rigoletto and Don Giovanni showed the depravity of the upper class. Audiences for these operas would have understood them in relation to their current moment. Now that these operas are performed outside of this context, there is a tendency to make them more precious than they were originally intended to be. We focus on performing the pieces the way they have always been performed without asking what the core messages of the works are and how those messages might resonate with a modern-day audience. And this is where a lot of the cultural baggage attached to opera comes from.

I did not grow up listening to opera, and I used to hold many of the same preconceptions about the form that many people do: it’s elitist, it’s boring, it’s outdated, and so on. I’m also all too aware of many of the problems with race and gender that the greatest hits of the canon still have.

Music allows us to assume the perspectives of people very different than we are.

Despite these problems, the reason I came to love opera (and what I believe brings many people to the form if they are able to experience it) is the immense power of sung drama. Music has the ability to touch us deeply, and music used in the service of storytelling can transport us into different places and times, even allowing us to assume the perspectives of people very different than we are. I believe that this is where the potential power of the art form lies. I also believe that embracing this power is what will allow the form to remain vibrant and relevant well into the future.

It is for this reason that I (and many of my contemporaries) often choose stories that can be described as “political.” Part of the reason that so many modern operas are perceived as “political” stories stems from the fact that they are taking perspectives that have long been absent from the mainstream and placing them on stage, just as Puccini was doing when he, Illica, and Giacosa wrote La bohème. For modern composers and librettists, there is now a widespread recognition that the historical default perspective (white and male) is not representative of the modern world (and was never really representative of the whole of human experience). Because of this, the conversations that we’ve been having around diversity and inclusion are key to keeping opera relevant. Understanding the importance of story in forming our sense of self and culture is an essential part of the equation. Storytelling is the bedrock this foundation. We can see the importance of story even from a young age.

Katherine Nelson’s work on early childhood memory shows the centrality of narrative to our developing sense of identity. Nelson has shown that learning the art of narration is the foundation for all of our autobiographical memories. The stories we learn to tell ourselves about ourselves form these core memories, and thus become the basis of our sense of identity and our place in the world.

We see a similar effect of story on our shared sense of culture. The stories we tell each other as a society give us a sense of cultural identity. They teach us about social norms and about who we are as a people: what our value systems are and how we fit into the world.

Therefore, we, as creators, must understand that part of what we’re doing is creating the stories that help to shape our culture. Because of this, all stories are inherently political in that all stories choose a perspective and place it front and center. If you’re thinking, “I have never chosen a perspective,” that is because you are assuming that your perspective is the default.

All stories are inherently political in that all stories choose a perspective and place it front and center.

The current age of American opera is more geared than ever toward letting everyone see themselves onstage. In the last year alone, we have been privileged to have operas including Fire Up in My Bones (Terence Blanchard and Kasi Lemmons) and The Central Park Five (Anthony Davis and Richard Wesley), both of which featured work by Black composers, librettists, and singers. Modern operas have also tackled contemporary issues like human trafficking (Du Yun and Royce Vavrek’s Angel’s Bone), mental illness (Philip Venables, based on Sarah Kane’s 4:48 Psychosis), and sexual assault (Ellen Reid and Roxie Perkins’s p r i s m).

I have tried to address similar issues in my own work. I’ve approached this by putting people onstage who aren’t normally seen there (including Pakistani Muslim women in Thumbprint [libretto by Susan Yankowitz] and Appalachian snake handlers in Taking Up Serpents [libretto by Jerre Dye]). My new work, Looking at You, takes this a step further by reaching outside of the opera world to create a piece with urgent contemporary relevance, exploring the impact of modern technology on our right to privacy.  Looking at You is a collaboration with privacy researchers at Carnegie Mellon University and tech engineers at Bandcamp.com.

This piece is absolutely the most complicated thing I’ve ever made. There are several reasons for this. From the beginning I knew that the audience would be an integral part of the show, so there were many unresolved questions about how the technology that makes the audience experience happen could work and how to integrate it with the music. A lot of the decisions about the libretto and the way the score works were influenced by what the tech would actually be able to do. For example, I decided early on that I wanted the chorus for the show to be made up of singing tablet computers. Of course, the technology to allow tablets to sync together in real-time did not exist, so part of the developmental process was trying out different ways of making that work. I figured out how to make the singing computer voices, but it took finding collaborators outside of the opera world (Joe Holt and Daniel Dickison of Bandcamp.com) to actually build the software that syncs the whole choir (both with each other and with the backing tracks). 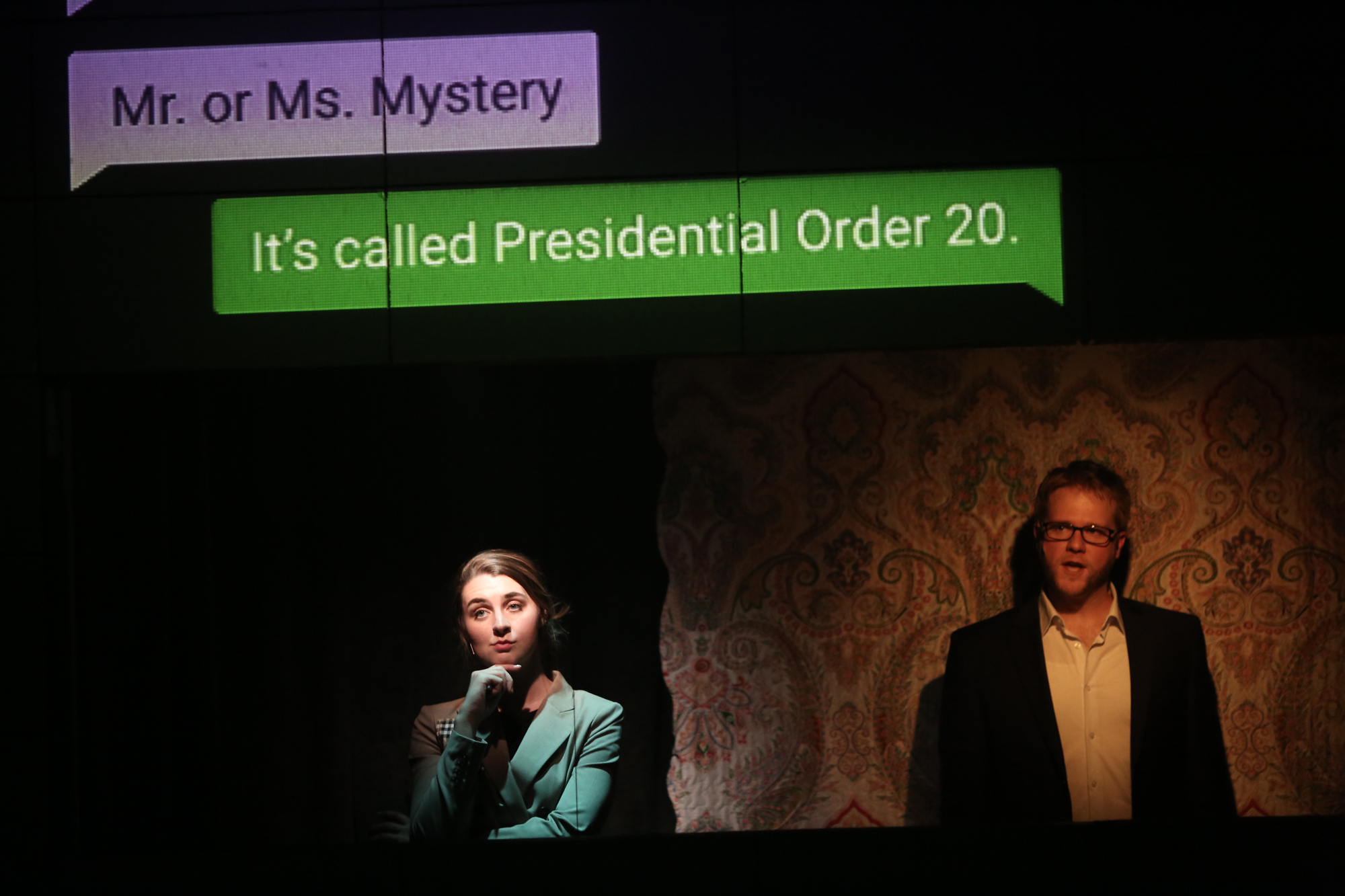 Mikki Sodergren and Brandon Snook performing on stage in Kamala Sankaram’s opera Looking at You (photo © by Paula Court).

This collaboration with academics and engineers from the tech world has been essential for creating a piece that gets at the heart of the issues we’re facing. We are in a pivotal moment, where new technologies are being created that will leave lasting social, economic, and political impacts. Tech companies are increasingly turning to machine learning based on mass user data to build better artificial intelligence. Unfortunately, machine learning utilizes what is known as “the hidden layer”—even the coders themselves often don’t know why their algorithms behave the way they do. An algorithm’s behavior is completely based on the patterns it perceives in the data set it uses to learn. Therefore, any structural racism or gender inequality that exists in the data will be coded into the algorithm’s decision-making and outputs. This has led to many problematic situations already, including the “decision” of Facebook’s algorithm to create an advertising category for “Jew-haters.”  More troubling, as algorithms are increasingly deployed to make consequential decisions including insurance rates, length of criminal sentences, and even whether or not to fire someone, there is no way to know how they made the decision and therefore no recourse.

Despite the immediacy of the issue, and despite increased awareness of online privacy concerns in the wake of the Snowden revelations and the more recent scandals at Facebook, many people are either not aware of the extent to which their personal information is widely available and how it is used, or are not concerned because “they have nothing to hide” (to borrow a line from the show). This may come from the tendency to see technology as something mysterious and inscrutable.

Our continued right to privacy is at risk. By presenting the issues in a non-pedantic and entertaining way, we hope to open our audience up to the issues and then to provide them with the tools to better protect themselves and their personal data. Further, we are doing this by collaborating with a creative team that includes women and people of color, and by creating a story with women and people of color at its center.

Truly modern opera is and must be: a real representation of the world, featuring all of the people who inhabit it.

It is my belief that this is what truly modern opera is and must be: a real representation of the world, featuring all of the people who inhabit it, and telling a story that is relevant to the issues that concern them. These stories matter. The people we tell the stories about and the people we see on stage matter. And that, in essence, is why they are and should continue to be so… “political.”

Kamala Sankaram’s Looking at You will be presented from September 6-21, 2019 at Here in New York City in a co-production with Opera on Tap and Experiments in Opera.

Praised as “strikingly original” (NY Times), and a “new voice from whom we will surely be hearing more” (LA Times), Kamala Sankaram has received commissions from Washington National Opera, Houston Grand Opera, Beth Morrison Projects, the PROTOTYPE Festival, Opera Memphis, and the Brooklyn Youth Chorus, among others. Awards, grants and residencies include: Jonathan Larson Award, NEA ArtWorks, MAP Fund, Opera America, NY IT Award for Outstanding Production of a Musical, the Civilians, HERE, the MacDowell Colony, and the Watermill Center. As a resident artist at HERE Arts Center, Kamala created... Read more »