Full Disclosure: many of the samples I share in this article are from the See-A-Dot Music Catalog, a company for which I am the director.

The choral composer’s concern is often one of accessibility.

A few years ago I attended a choral conference, and during one presentation on new music an attendee raised his hand and asked, “Is polyphony in choral music dead?” He was referring to the increased use of homophonic textures in choral music, which I believe comes from composers wanting to create increasingly dense harmonic textures to fit in with other mediums in the contemporary music world. The choral composer’s concern is often one of accessibility, since the majority of ensembles in the USA are avocational groups.

I don’t believe polyphony is dead, but I do think the future of choral music will embrace techniques that preserve the horizontal approach to writing, while maintaining accessibility and not falling into anachronistic musical styles like traditional tonal polyphony. Such techniques are already arising in today’s choral music. Our traditional interest in polyphonic textures and increased harmonic complexity can, for instance, be satisfied with thick layers of otherwise tonal material. When done well, these layers create dense, multi-faceted textures, without demanding a high level of virtuosity from the singers. Instead, these techniques will engage choristers as thoughtful and musical artists.

Layering melodic cells offset from one another is reminiscent of rounds and canons.

One technique that mimics the horizontal focus and function of polyphony, without quite as much attention to the consequent vertical harmonies, is the layering of melodic cells offset from one another. This is reminiscent of using rounds and canons, but instead of using the same material repeated in every part, each voice has its own repeated phrase. While the technique can be used in combination with other types of writing or just in specific sections of a composition, it can also stand on its own as the sole organizational idea behind a piece. This is seen in minimalist instrumental compositions such as Terry Riley’s famous In C, but is also found in vocal ensemble music and vocal adaptations of instrumental tunes.

Meredith Monk is a pioneer of this technique, which can be found in one of her most popular works for chorus, Panda Chant II. Panda Chant II uses a series of short cells, most in different meters, that are layered additively one on top of another sequentially, creating a dense wall of sound. Here’s a performance of the piece by the San Francisco Girls Chorus:

What I love about this piece as a conductor is how simple it is to teach to the singers. I have taught this piece to a variety of groups from traditional community-style choirs to workshops for dancers with little to no singing experience. Other recent compositions for choir, like Bettina Sheppard’s Love is Anterior to Life, use the same technique, but with a more familiar notation and choral structure. In this piece, each voice is given a melodic phrase, anywhere between one and eight beats in length, which are layered on top of one another creating an undulating texture series of phrases.

Pieces like this make for a great first rehearsal “win,” yet still remain musically engaging through the rehearsal process. However, while singers can generally memorize their parts after a few minutes of repetition, the simplicity of the piece emphasizes how ensemble listening is what makes or breaks a successful performance. It’s not enough in a piece like this to get your own part right; engaging with the how your part fits in with the others and maintaining a sense of meter, blend, and balance are key to its success.

These examples use layering as their sole method of composition, and this idea of combining various repeated phrases of different lengths can also be used to great effect without organizing them additively. Ethan Gans-Morse’s Kyrie is a similarly constructed minimalist piece, yet instead of layering each phrase on top of another in sequential order, these cells act as base musical material, which are combined through different permutations to create a narrative flow. The effect is a relentless and haunting experience.

These are just a few examples of ways to explore this idea. It can be a creative and effective way to bring a different kind of polyphonic texture to your work without increasing the harmonic and rhythmic difficulty of the individual lines, thus making the piece more accessible to avocational singers and students.

Fahad Siadat creates interdisciplinary works, folding words, sound, and movement into ritualistic narratives. He is a frequent soloist with such groups as The Industry and PARTCH, and has had his music performed in Europe, China, and across the United States. Fahad is artistic director of HEX Vocal Ensemble and is co-artistic director of The Resonance Collective. In 2012, he founded See-A-Dot Music Publishing, a company devoted to the advocacy of adventurous choral music. 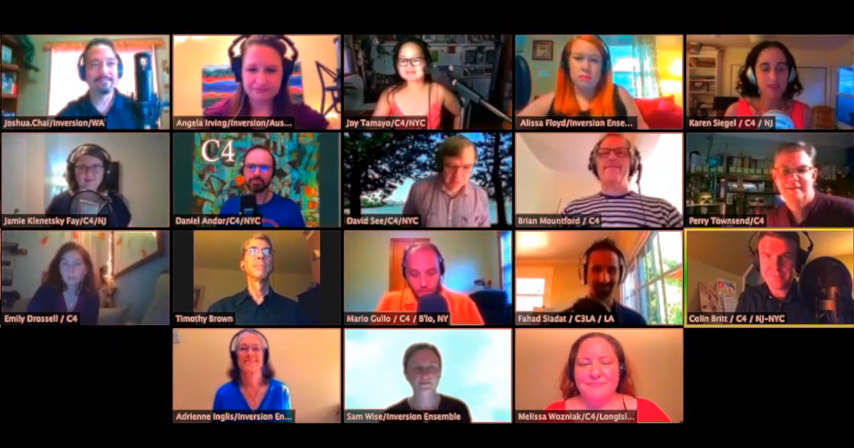