My alarm goes off at 5 a.m. and I vault out of bed like a meatloaf rebounding off a linoleum floor. There’s an awkward shuffle in the dark as I locate pants and shimmy to the kitchen where I process my reward for not oversleeping: the first coffee of the day. This is a great time of day to be awake and the coffee discretely severs my tether to sleep before I hit the road. At this time of day, the world is silent and my thoughts would be able to jam wildly in my head if I was having any. I arrive at my destination—an industrial park not far from town. There’s another sip of coffee before I suit up: steel-toe boots, jeans that are never clean, sturdy work gloves, and a tool belt. I’m a concert music composer who has a secret life working in the trades. 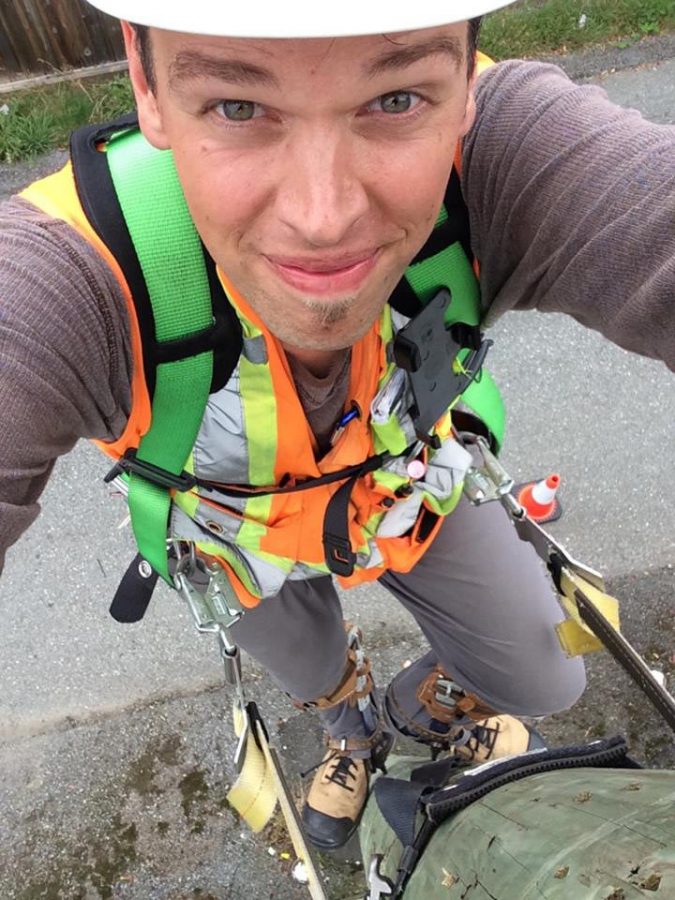 About five or six years ago, I made a big change. I had been doing my composer work for approximately a decade at that point and working various retail and kitchen jobs to support my art. From a writing standpoint, things were going very well. My craftsmanship had reached a point where I felt like I was no longer writing student works, professional ensembles would approach me to write for them, and I was bringing in money for the work I was putting in. My career trajectory was looking up.

But then the math set in.

I was being commissioned to write three or four pieces a year. At the rate I was being paid, I could hypothetically divorce my side gig by writing eight to ten more pieces annually. The idea of even approaching doing that much writing was, frankly, unappetizing and completely unrealistic. I was already living the lifestyle of a borderline hermit. Spending more time at my writing desk by forgoing luxuries like sleep, daylight, and grocery shopping didn’t exactly fill me with glee. Also, I was quite sure that if I tripled my output, I would produce exponentially less work I was proud of. The scales would be tipping towards quantity at the expense of quality if I pushed much harder.

If I was unable or unwilling to increase my composition output, I was going to be working my side gig for the next thirty years. Did I want to work in my retail-kitchen churn for that long?

Film work is a great gig for a composer. For one, it can pay quite well. For two, it has exponentially more glitz and glamor than the pencil pushing in concert music circles. For three, because people watch movies in droves there’s the regular possibility someone might hear your music and register a thought about it. But you have to hustle to get film gigs. Big time. It’s not like you just wake up one morning and decide to turn on a faucet that magically sprays you with succulent composer dollars. Anybody who makes their living as a film composer got there by busting their ass. The best suggestion the experienced film composer will give you is if you want to get into film music you should get a reliable job so that you can support yourself while you build yourself up. For me, it just didn’t make sense to have a job I didn’t want, to support a creative pursuit that wasn’t my first choice, in order to financially support myself in the pursuit of my first choice. I could easily remove the film work middle-man and continue in kitchens and retail and be equally miserable.

Academia is a rich pursuit for many of us. However, I was already sick of high academia after my undergrad and, at that point in time, the relationship between the teacher’s union and my local government could be best described as a fistful of pins pounding sand. There were also other problems: I had spoken with a number of teachers who were at the start of their own careers and they were teaching sporadically, with long commutes, and having to do side gigs in order to maintain an income. Not exactly a ringing endorsement. Also, if I’m being honest, I’m more of an introvert than an extrovert and I’m just not so sure I would be a good fit for the profession.

So instead of making sales in retail, cooking omelets in kitchens, teaching algebra in classrooms, or writing for my second choice, I picked up a hammer and swung for the bleachers. I was going to work in the trades. When I explain my side gig to people, I often tell them I’m an Internet plumber—my trades colleagues call me a splicer and preface it with the word “filthy.” There are hundreds of thousands of kilometers of cable that snake all over the world humming with data. They hang in the air from telephone poles, they run in underground conduit between manholes, and they even run along the bottom of the ocean. Making sure they are connected properly, figuring out why they might not be connected properly, and splicing them together is my new side gig. My typical day now involves climbing telephone poles with climbing gaffs, ladders, or in a bucket truck; splicing together fiber optic, twisted pair, and coaxial cable; troubleshooting network problems; and getting absolutely covered in grime. It’s dirty work and I love it. 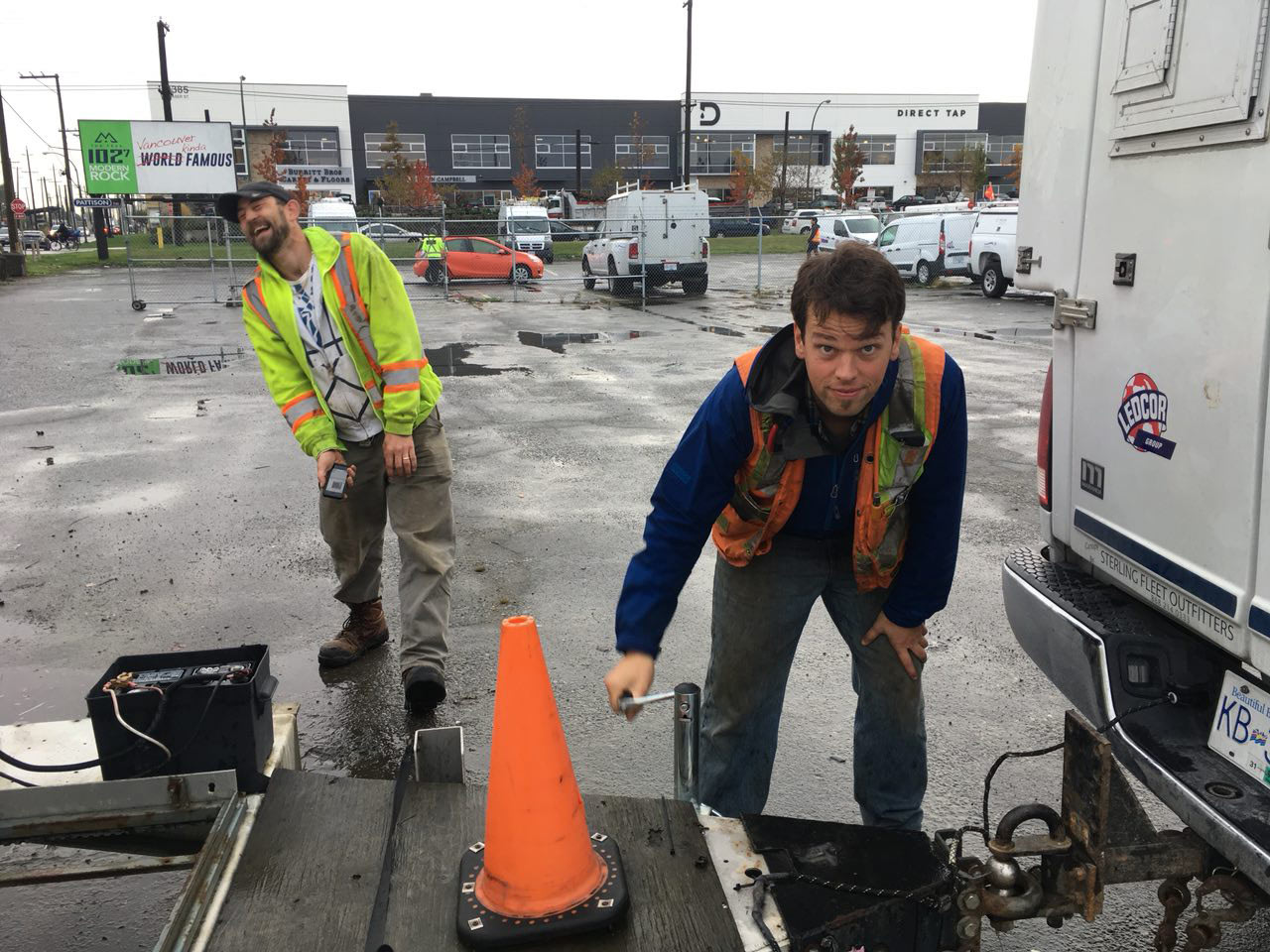 I’ve been at it for three or four years now, and it often feels like I’m leading a double life—something I’m still learning to navigate. There are relatively few of my new colleagues who are interested in classical music and I’m still new enough that I feel like I need to establish myself as someone who belongs where I am, perhaps unjustifiably so. So I don’t mention my composing to my colleagues much during the morning shuffling of trucks.

I don’t mention my composing to my colleagues much during the morning shuffling of trucks.

But I think the reason I keep my art close to my chest is because I’ve encountered a perception in the trades that the arts are a dalliance; art can’t possibly be real work and those who do it don’t understand what real work is. When I was first hired, I was driving to a job site with one of my bosses and he casually mentioned that his son was a musician. Before I could chime in with my shared experience, he rushed to explain that his son wasn’t lazy or lacking in ambition; the young man had a teaching and recording studio and was doing quite well for himself. The immediate defensiveness was striking and I kept quiet. I was right at the beginning of my entrance to the trades and there was a pressure on me to be perceived as a competent and good worker. I didn’t want to jeopardize that by tapping into people’s prejudices.

On the flip side, you can encounter those in the arts who reject you at the molecular level because you don’t fit their perception of being serious about your arts practice. To them, a serious musician derives their income primarily from performing and teaching. There is some flexibility in accepting entry-level restaurant work but if you exceed those narrow parameters then, to them, you must not be serious about your art. Your fellow artists will gossip about your side gig as if you were perpetuating adultery by opting to swing a hammer to pay the bills. Even if there were any rules, written or unwritten, that legislate how a person is to balance art in their lives, it shouldn’t matter if you’re a barista or a plumber. The linchpin is whether or not you continue to make art happen. If your side gig allows you to continue doing it then your dedication to your arts practice is reinforced, not weakened, by whatever you choose to do to keep yourself afloat.

So I tend to maintain a separation between my two lives. It’s not that I don’t talk about it with anyone ever, but I definitely avoid it as a leading topic of conversation. However, I think there is a balance that I have yet to achieve. I recently left my old company to work somewhere new, and on my last day I mentioned to my crew that among the things I was looking forward to in my new life was finally being able to get a piano again. I had been living in a shared space and this was changing after my move. This piqued the ear of an older colleague who was driving me to a site and, once we got to talking, I found out that he was also a pianist. In fact, he had been a touring musician in the ’70s and had a studio back home in Alberta. On this singular drive, we discovered we shared a love of jazz and classical music. We were both flabbergasted. Like me, he had his own crisis when he was a young man and decided to get into the trades to keep his music alive. I had been working with the man for almost two years at that point and we had never clued in to each other’s secret identities. I was hit with regret—playing my cards so close to my chest caused me to miss an opportunity to connect with a colleague. I’ve since relaxed my subterfuge. After all, part of what makes music appeal to me is the chance to connect with other humans over our mutual appreciation of it. 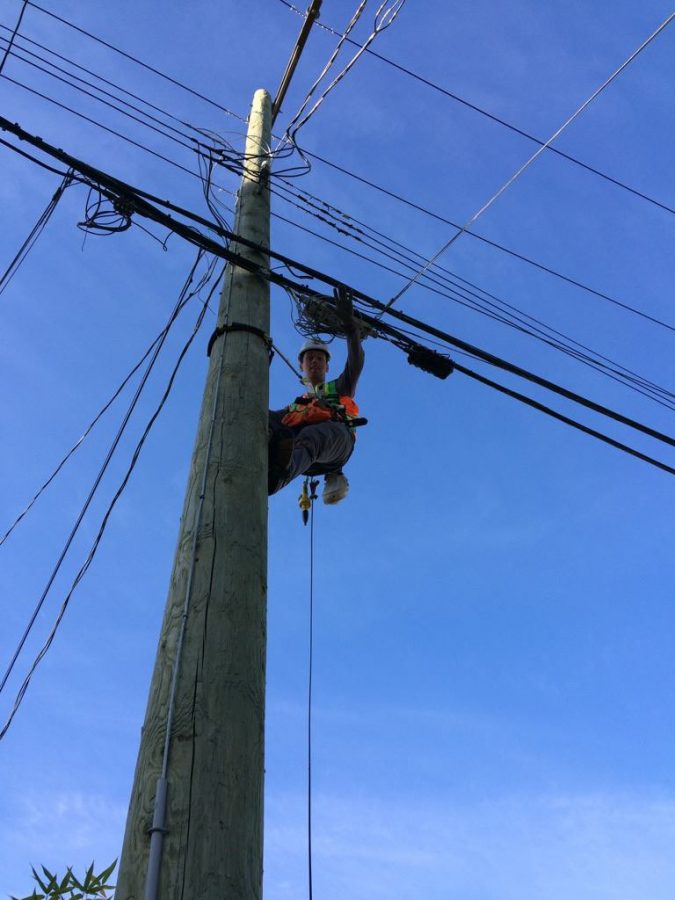 I still have time to write. The same hours I had set aside when I was working my old side gig are as available now as they were before. I also find the creative juices get flowing during moments of solitude at work. I once experienced a wonderful creative rush while driving a truck through a mountain pass and had to immediately pull over and jot some sketches down. Many people say that the hours in the trades are long, and they sometimes are. But one of the benefits is that when I hang up my hard hat, I hang up the stress of my job with it. My work doesn’t follow me home. Instead, I go to choir practice, I open up a copy of The Well Tempered Clavier, I get out a pencil and some manuscript paper and dash some squiggles that will hopefully one day become something memorable.

Initially, I might have been resistant to heading into the trades because I was worried I would be giving up on music and my composition career would end with a resounding thud of failure. I was wrong. The only way you fail at art is if you stop doing it. There’s no reason a composer can’t be a plumber or an electrician instead of a teacher. All you have to do is keep writing.