The polychromatic system is oriented toward exploring the outer limits of micro-pitch awareness and its expression in music, from a perceptual rather than conceptual (i.e. mathematical, theoretical, analytical) perspective.

The polychromatic system is based on principles of associative synesthesia: learned associations and conceptual/perceptual integration of audible pitch with visual color. Recent research has shown that associative synesthesia can be developed with practice. Music is an optimal area in which to extend the possibilities and potential of synesthetic awareness, both aesthetically and scientifically. 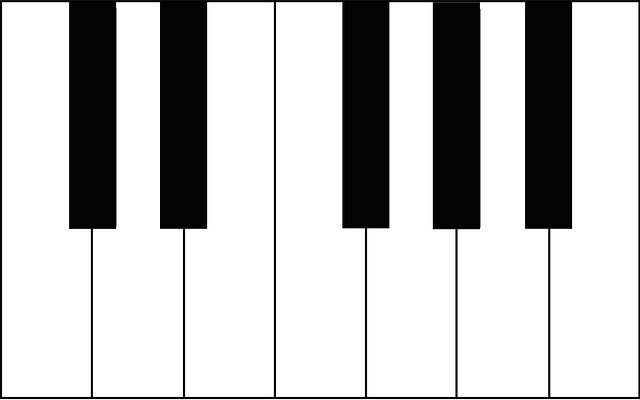 Moving up to 36 edo (equal divisions of the octave) brings new complexity. Now we can imagine a pitch-color above (say, blue) and a pitch-color below (say, red) each chromatic pitch. One way to describe them would be to say that, in the key of ‘C’, C-red is flat-ish and C-blue is sharp-ish relative to the chromatic pitch. The problem here is that the terminology of flat and sharp are embedded in the chromatic language both as a pitch definition (Db, C#) and as a pitch modifier (bb, x). By applying the concept of pitch-color, we can avoid both the confusion in terms and extreme notational complexity (countless, incompatible pitch-modifier symbols) ‘bolted-on’ to chromatic black and white notation.

This describes how I proceeded in trying to work with very high pitch-resolutions. The polychromatic system evolved to allow the creation of a simple notation and theoretical language for writing, learning, and memorizing micro-pitch music within a pitch division scheme of 106 and 72 edo. 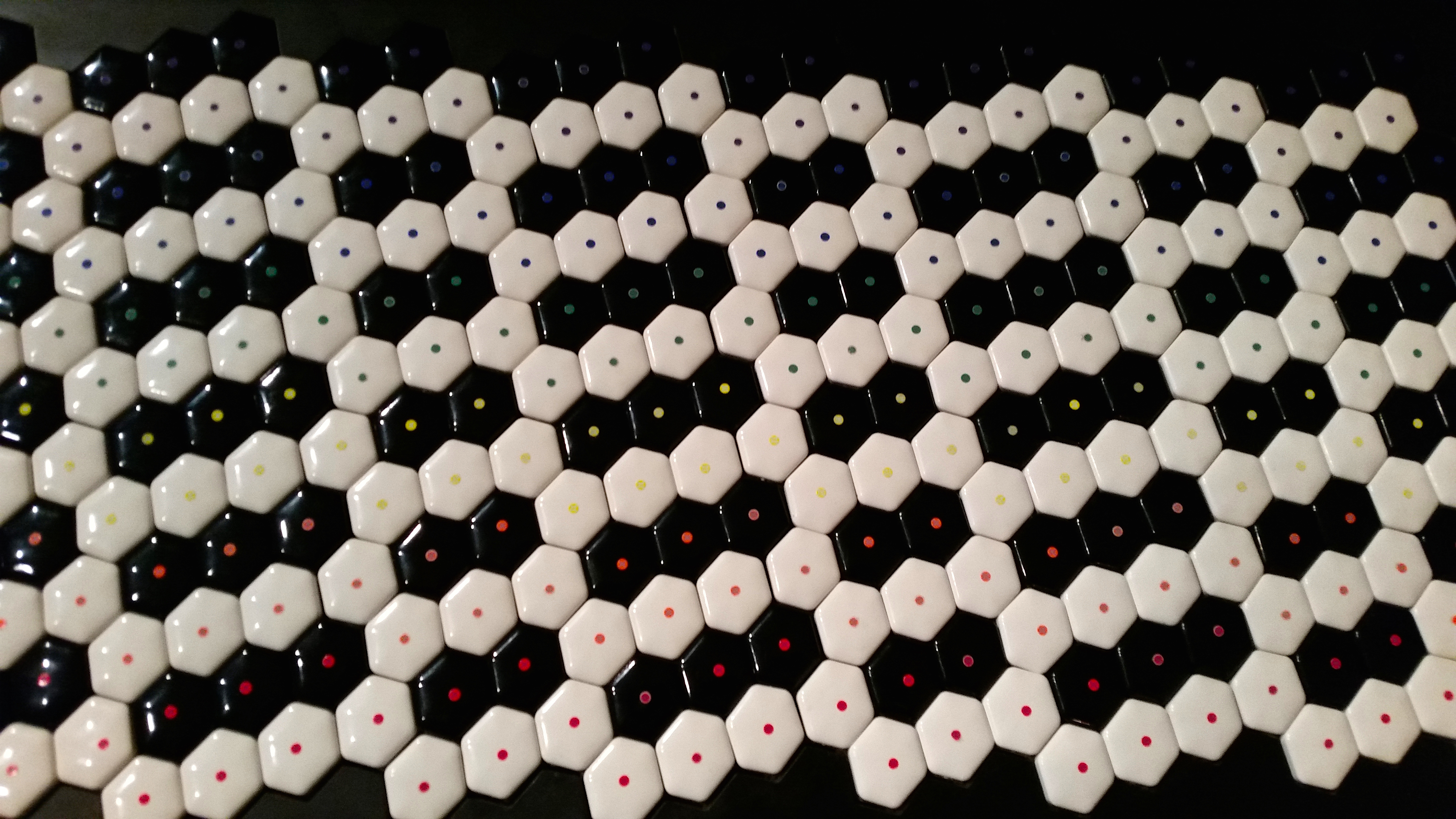 The pitch-color concept is not absolutely defined, so the values (in Hertz) of C-red are different depending on the scale division method used. In this way, the language says remains generally consistent, while being adaptable to any conceivable pitch scale. Unique pitch definitions are defined at the beginning of each composition. This enables an efficiency of learning and possibility of using of multiple pitch scales (simultaneously or via ‘modulations’), all under a unifying and intuitive pitch-color concept.

The pitch-color concept is intuitive by way of an easy association of micro-pitch to the visual color spectrum—from infrared to ultraviolet. A simple association can be made with a continuum of flatness to sharpness for each reference pitch (chromatic or other) to the visual color sequence we already know from the experience of seeing rainbows and other light diffraction phenomena.

I use equal divisions of the octave as a method of pitch division because it is a rudimentary and self-explanatory element to begin from in my early explorations of auditory limits of pitched-sound differentiation. My approach is to use the highest possible edo scales within each new keyboard design.

When listeners hear microtonal music as ‘out of tune’, this impression arises from a chromatic frame of reference. A new foundational frame of reference or perspective needs to be established in order to appreciate microtonal music on its own terms and not in comparison to the macro-pitches of the chromatic system. This foundation is what I have been seeking in developing a polychromatic system. In general, microtonal music can seem extremely abstract for unprepared minds and ears, especially without a new framework of understanding (for reference and comparison).

The polychromatic system builds upon the fundamental concepts of the chromatic system (note definitions, harmonic principles, and music theory) as a common point of reference – and departure. From this common framework, increasingly refined levels of micro-pitch discrimination can be explored within a known system of musical understanding. As greater refinements of pitch and harmony recognition are developed, increased awareness can enable the recognition of further pitch-colors, as entities in themselves, without trying to force them into the conventional frame of reference: a coarse pitch-resolution, chromatic system.

Paradoxically, ‘tradition’ has vital importance in the creation of new musical systems. Here, we are talking about tradition as our accumulated experience of the past, a shared frame of reference, an implicit basis and context of listening to and composing music—and not in the sense of calcified conventions of the past and present.

Paradoxically, ‘tradition’ has vital importance in the creation of new musical systems.

Polychromaticism is an approach and practice which uses chromatic music theory as an initial basis for conceptual anchors. In this way, extensions of established tonal and harmonic principles assist in the understanding of the new possibilities and implications of the polychromatic system. This creates a conceptual and perceptual bridge between our current and many future systems of music.

The use of chromatic conceptual anchors comes into play when I am trying to memorize a piece for performance. Using the conceptual anchor of a dominant 11th chord, I remember the constituent pitch-colors of the chord as minor modifiers within this larger conceptual structure, instead of having to remember each pitch-color individually.

My composing process is much more intuitive than analytical. As a result, I have neglected doing harmonic analyses, after the fact, to determine possible new theoretical models. My hope is that others with a passion for analysis will create new music theory models to aid in teaching the polychromatic system more efficiently. Philosophically, I see this as part of a larger 21st-century process which is based on collaborative innovation in music, science, technology, and the sound arts.

As a musician, it seemed impossible to gain a fundamental grasp of microtonal music because it consisted of so many discrete pitch-scale methods, all separately existing without a fundamental, underlying system.

With a polychromatic basis in notation and generalized pitch-color concept, any micro-pitch language could be quickly assimilated without having to relearn scale-specific notations. The current expansion of esoteric and fragmented micro-pitch scale methods, of reinventing-the-wheel (in notation) with each, can make wide exploration within microtonal music intimidating and difficult.

The use of non-chromatic color schemes:

While the color schemes here are different, my impression is that these are examples of a modally optimized layout – in the sense that adjacent keys are 3rd, 4th, 5th, and 6th intervals rather than chromatic minor 2nd’s (or smaller) intervals. In the polychromatic system there are multiple pitch-color variations of each interval, rather than the single fixed-interval value in these layouts. Why be limited to just one major 3rd interval, when multiple intervallic pitch-color choices—singularly or simultaneously—could be available?

Art doesn’t come to us, we must come to art.

The possibilities of growth and awareness gained through our engagement with art remind me of the idea that art doesn’t come to us, we must come to art. This idea expresses both a necessary receptivity to new perspectives as well as an active personal involvement which engages the listener’s creativity and imagination, in a similar way to that of the composer. In this process, the listener becomes a receptive-artist interacting with the compositions of the expressive-artist (composer). If we become what we practice, then exposure to, and interaction with challenging art can help us expand our integrated perpetual/conceptual awareness, and expose us to new dimensions of emotion and insight beyond the limits of spoken language.

In the next article, I will describe technical (physical technique and technology) aspects of my approach to polychromatic music, as well as some discoveries and implications that I have become aware of in my early explorations.

Dolores Catherino is a PolyChromatic composer and multi-instrumentalist. Her avant-garde compositions explore ‘pitch-palettes’ beyond 100 notes per octave. Inspired by creative collaboration, she also explores integrated perspectives at the crossroads of music, science, technology, and the humanities. “OUT∃R WΩRLDS by composer Dolores Catherino represents a search for intelligent life between the notes. The result bridges the gap between 20th-century classical modernism and classic synth space music.” – Marc Weidenbaum, Disquiet.com

► ▼One thought on “Understanding the Polychromatic System”